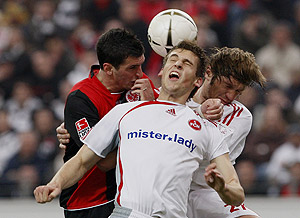 It wasn’t so long ago that Matthew Spiranovic was being talked up as the next great Socceroos defender, having burst on to the Bundesliga scene as a teen phenom with FC Nürnberg.

But last week Spira left Germany on loan for Japanese club Urawa Red Diamonds, the latest in a trickle of Aussies trying to reignite their fading representative careers by decamping to the Land of the Rising Sun.

The number of Australians playing in Japan presently stands at four: Eddy Bosnar at top-tier side Shimizu S-Pulse, Mark Milligan at JEF United (where he came in to replace Bosnar), Josh Kennedy at Nagoya Grampus and the aforementioned Spira.

Since the early 1970s the likes of Dennis Boland, Mark Rudan, Graham Arnold and Steve Corica, among others, have all plied their trade at one time or another in Japan.

But does national coach Pim Verbeek rate the league and the other comp over the ditch, the K-League, that highly?

On the basis of selecting players for the national team, the answer appears to be no.

Towering unit Bosnar, who continues to be overlooked for the Socceroos despite having signed for one of the most exciting and best supported teams in the J-League, would likely agree with that analysis.

As would Sasa Ognenovski, who was a rock for Seongnam Ilhwa Chunma in the K-League, being part of a side that went to the final and qualified for the Asian Champions League.

Jade North and Antun Kovacic, meanwhile, would undoubtedly prefer we not mention them at all, their switches to Incheon United and Ulsan Hyundai Horang-i from the A-League failing to set the world on fire.

North, who has been the recipient of some great forbearance from Verbeek, will be very lucky to get to South Africa at all.

Only Kennedy, Mr Rent-a-Melon for Nagoya and the Socceroos, has got any consistent love from the Australia coach.

If you look at Verbeek’s CV, outside of his roles with Korea Republic, he hasn’t had a great time of it in the Far East. Two spells as a club coach in Japan, first with then-amateur-cum-J2 club Omiya Ardija in the late 1990s, followed by a short stint at Kyoto Purple Sanga in 2003 (he quit the job for Netherlands Antilles).

Nothing to crow about.

Yet if you make the supposition that Verbeek doesn’t rate the J- and K-Leagues, it’s contradicted by his own statements, made to me in interviews, that “the organisation around the national teams and club teams [in Korea] is absolutely fantastic – the best of the best” and “I was really impressed by the [Japanese] culture, by the J-League itself”.

The only hint he has given me of his reservations about Japanese football in the various conversations I’ve had with the man was when he explained: “The Japanese play combination football. More Brazilian influences than European.

“Efficiency wasn’t so high because they were focused on combination and ball possession instead of scoring goals … in Japan, they always try to build out from the backline to the midfield to the striker and back and that’s the way they prefer to play.”

Too fancy for No-Frills Pim, then? Perhaps.

So, ultimately, is Japan a good move for World Cup hopeful Spiranovic?

Urawa is a massive club but is in a period of decline, having finished seventh and sixth in its past two seasons after a golden period in the mid to late noughties.

It’s thought Spira has come to plug the gap left by Japan star Marcus Tulio Tanaka, who sensationally quit the club for Nagoya Grampus, which on one level attests to the young Australian’s quality to be spoken of in the same breath as Tanaka, but also should be regarded as a reminder that he keep his options open.

My Roar colleague Mike Tuckerman, a former resident of Japan, explained to me recently: “Tulio went nuts at Urawa for selling Alessandro Santos to Nagoya midway through last season… he basically labelled the Reds back-room staff ‘idiots’ and they were determined to get rid of him.”

And for his sake and the nation’s, let’s pray he gets to play some football and Pim, most importantly, is watching.