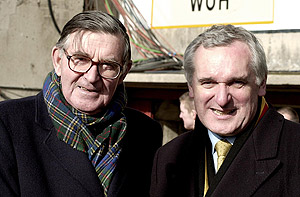 In Sydney yesterday, it was a balmy summer day with a slight sea breeze sweeping in over the sand on the ivory beaches. I took myself for a walk up the street and saw cars full of happy teenagers heading off to the seaside and mothers pushing small babies in prams enjoying the sunshine.

It was a classic Australian summers’ day, with the smell of eucalypts in the air and the sound of cicadas chirping gaily in the trees outside my office window, but I felt chilled and my mind was half a world away.

Despite the heat, I felt as bleak as the weather in the town in my dreams – a small Scottish Borders town called Hawick, home of the Hawick RFC, where yesterday the temperature was almost freezing and an icy south-easterly wind was whipping in around the cracks in the doors and gusting the drizzle against the window panes.

Shoppers hurrying along the Hawick High Street were silhouetted against the tall sandstone edifices like mourners with their heads down, and the grey cloudy sky gave an entirely appropriate atmosphere of bereavement to the scene.

The funerary air spilled over into the hearts of Hawicks great rivals, Gala RFC, and onward across the Borders of Scotland to the whole rugby world, because yesterday we lost the truest of rugby men.

Our grandfather, our artiste, our rugby poet laureate, Bill McLaren, was dead.

Hearing the news that McLaren was gone, was akin to hearing that the Wallace Monument had collapsed from the top of the Abbey Craig; that the Eiffel tower had fallen into the Seine; or perhaps that Table Mountain had tumbled onto Capetown.

Immovable objects all, which, like McLaren, have just always been there. It never occurs to you to think that one day they may not be.

For me, as for many southern hemisphere rugby nuts, northern hemisphere rugby and Bill McLaren were one. As a young boy, long before I ever travelled to London, I had the idea that everyone in the whole of the UK, perhaps even Europe, spoke with a Scottish Borders accent, because when you watched the Five Nations championship on the ABC, it was all you heard.

There was no such thing as a player interview, or an after-match chat with the coach in front of a sponsor’s banner. McLaren carried the whole show and no-one else ever seemed to speak. They didn’t need to. If McLaren had recited a telephone directory people would have listened.

I recently had a wonderful conversation with a mate who played for one of my old clubs, the Goulburn Dirty Reds. As a youngster he was so thoroughly indoctrinated into the cause by McLaren’s dulcet tones, that even now, he starts stories of his Australian country town childhood with the phrase “When I was a wee boy in the ‘Burn …” delivered in a Scottish burr. He’s Italian – and he’s only half-joking. McLaren had that effect on us all.

Anyway, “…when I was a wee boy in the ‘Burn” he said “after watching the Five Nations replays on the ABC late on a Saturday arvo, I’d go out into the backyard and kick the footy around with my dog Suzie and pretend to be Johnny Rutherford who was my favourite player. As I was playing I’d commentate in a Bill McLaren accent. Joooohhhnnny Rutherford!”. Ahh yes. Didn’t we all?

It seemed that McLaren was on intimate terms with every player he described, and with the amount of preparation he put into his commentary – attending training sessions, handwriting reams of notes, shuffling cards representing players and doing phantom calls – it’s probably no surprise.

He managed to get a tremendous amount of information into his call, and there was something in his tone which made you remember things effortlessly, even years later.

Players ages, occupations, scoring records and towns of origin were delivered not as dry data, but as wonderful gems and secrets which were hard won and inestimably valuable.

His knack for context, delivering the right fact at the right time and making you feel like you knew the people playing the game, gave you an emotional investment in the outcome which was simply irresistible. How else would I remember the occupation and hometown of 1980s French prop with a liverish paunch and a walrus moustache?

It was as if I loved Bill so much that I didn’t want to disappoint him by forgetting. He so clearly cherished what he was doing that we cherished it too.

There is a divide between those who work in rugby for the love of it, and those for whom it is simply an available profession.

The latter group has inched ahead in the last decade, and the game is the poorer for it, as a growing list of former players join the commentary ranks, not necessarily because they have a burning love for the game, but simply because they can.

McLaren was El Presidente of the Rugby-For-The-Love-Of-It movement and we identified with him. We felt the pounding of McLaren’s own heart as he described the crowd’s rendition of Flower Of Scotland in 1990; we heard the awe as Scott Gibbs burst through the English line to score in 1999, “a marvellous score, the angle of his run was superb”; and heard the chuckle as he described French prop Christian Califano’s pace “This lad can do the 100m in 12 seconds. That’s sonic boom for a prop forward, I tell ye!”.

We loved Bill McLaren because he was just like us, an average rugby nut. Unlike us, he went agonisingly close to winning his first Scottish cap before tuberculosis almost killed him and put and end to his rugby.

Had he won a cap, or several caps, he would perhaps have been just another ex-player on the box and we may not have loved him as much.

But that possibility was cold comfort to McLaren.

He wanted to play for his country and he actually had the ability and motivation to make it a reality. The fact that he didn’t manage to win a Scottish cap was a lasting regret. In his final interview with Borders Radio in 2005 he said “The greatest regret of my life really. From the time I was a wee boy, my mother’s cousin Wattie Sutherland played on the wing for Scotland and I heard stories about him when I was a boy, and I always had that one great desire to play for Scotland. Once would have done me fine. I didn’t need 50 caps, one would have done me fine. And when I look back, old and doddering, about 114 years old….that will be the one great regret of my life”.

“I would have given anything for my name to be in the book. WB McLaren…open bracket…Hawick…end bracket…one cap. Would ha’ done me fine. Just one! But…c’est la vie”.

But McLaren’s loss was the rugby world’s gain.

Perhaps for those of us from the South, his value was even greater, because when you heard the strident McLaren tones marching from the television speakers, you knew that your team was on tour in hostile territory, advancing on the gloomy English, the quicksilver Welsh, the wily Irish or the dour Scots.

It wasn’t an everyday accent down under, so there was no question that we were in for some truly international rugby. A Bledisloe in the eighties with Keith Quinn or Gordon Bray on song was wonderful, but the Wallabies versus the Barbarians at Twickenham with McLaren on the call, was beyond sublime.

The fact that it was being aired at 2am only increased the wonder, because you knew that right then, at that very second, as you sat there with your hot chocolate and Arnotts Iced Vo-Vo’s, the Wallabies were going into battle and McLaren was your personal tour guide.

Perhaps the greatest wonder of Bill McLaren’s commentary was his total impartiality. There was respect, but no malice, in his voice when he described the All Blacks as “looking like great prophets of doom”.

There was amusement, but no trace of nastiness, when he described Wade Dooley as a “perambulating lighthouse”. And there was amazement, but no venom, when he imagined Simon Geogeoghan as being “all arms and legs like a mad octopus”.

His delightful accent, deft turn of phrase and affectionate manner undoubtedly helped, but his love of rugby shone through and eclipsed all else.

No matter whether he was calling the All Blacks playing the Barbarians, Scotland playing England, watching Borders play Edinburgh or Hawick play Gala, McLaren simply revelled in the rugby.

When asked some time back about great players from the Gala club (who were great rivals of his beloved Hawick), McLaren affected a glowering brow and boomed “We don’t talk about Gala round here”, before breaking into a grin and holding forth on some of Gala’s great players from years past.

He was incapable of hostility to anyone in the rugby family.

And so it was that as news of the death of Bill McLaren reached me in Sydney, I felt as sad as if a close friend, that I hadn’t seen for a long while, had died before I got a chance to call.

I wished, like many of my era, that I could have told him just how much he was responsible for me falling for rugby hook, line and sinker, as a 13 year old boy in a rugby league town in far off New South Wales.

But then, after a time, sitting in the sunshine while the sleet and ice cluttered the doorways in distant Hawick, I felt happy at how lucky I have been to be one of the family in so great a game as rugby, and to have known Bill McLaren.

As anyone who has ever listened to Bill call a match will know, you didn’t have to have met Bill McLaren to have known him. It was all on display right there. Wit, compassion, humour, inspiration and an inexhaustible reservoir of adoration for the game and its people.

McLaren himself once said “If it all ended at this single moment, it’s been a delight and I’ve thanked God for the fact that I was in the right place at the right time and I managed to get my nose in the door. It’s just been a treat. You can’t expect anything better than to see Scotland win the Triple Crown…and do the commentary!”.

Well Bill…with the greatest respect…if I had the choice between doing the commentary and listening to you do it? I know which one I’d choose.