Is this the greatest derby in world sports? 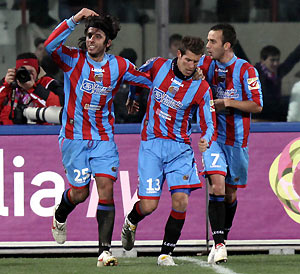 On Saturday, La Gazzetta dello Sport declared it the greatest derby in the world and the game hadn’t even happened yet. The pink sport daily had “analysed” all of Europe’s other derbies and decided none had as many titles between them, as big attendances or successful teams as the Derby Della Madonnina.

La Gazzetta’s liberal criteria aside, on Sunday evening spectators and television viewers were treated to an engrossing affair at the Giuseppe Meazza stadium.

In fact, it was a great weekend for Italian calico and it’s followers in general.

On Saturday, ‘Le Elephante’ in Catania continued to turn over a new leaf both on and off the pitch. Almost three years to the day after a policeman was killed outside the Stadio Massimino during the Derby di Sicilia, Catania entertained Parma in front a joyous and nearly full house without a hint of trouble.

Later that day, Claudio Ranieri returned to Juventus with his new club, Roma. It wasn’t the most aesthetic game of football but was nonetheless still entertaining football. 24 hours later and Marco Bresciano’s “Super Palermo” continued their climb in Serie A’s European places.

Then, of course, came the derby so important to ultra Catholic Milan they named it after the Christ’s mother and the latest edition was a corker.

After 90 minutes, two goals, two red cards and one saved penalty Inter Milan were victorious. As the stadium erupted the players celebrated like they had just won the Scudetto (though some in Italy feel they may have).

When interviewed after the final whistle Inter goalkeeper Julio Cesar was so tired he couldn’t speak. Once the Brazilian finally sputtered out some words he claimed the title race wasn’t over but few believe him.

As if to further emphasise the point a group of Nerazzurri fans unfurled a banner that read “In Milan there are two great squads. Inter and Inter’s reserves.”

Mourinho implied there was foul play at hand when he said he’d “tasted something strange and smelt a strange odour” during the game.

Adding that, “this is your country, your championship. I will move on sooner or later, and the problem will remain yours.

“I believe we will succeed in winning this title one way or another. Now everyone can shut their mouths. This match was an embarrassment.”

It was negligent from Mourinho.

There are already enough people in Italy who have forgotten about Calciopoli and such accusations shouldn’t be banded about with reckless abandon.

So it’s a shame Mourinho couldn’t show the same kind of gracious restraint and respect his opposite number Leonardo did after the match.

Yet, while disappointing, it won’t overshadow a thoroughly delightful derby. In fact, it just further emphasises how one match summed up Italian football in all its paradoxically frustrating glory.

Ever since Kaiserslauten in 2006 many Australians, be they football fans or otherwise, have held a strong (yet mostly understandable) resentment against Italian football. But for them, more the pity.

Italian football is a flawed beast but even as it flops in Europe, Serie A continues to provide some of the most entertaining football in the world.

Change within “calico”, as always, are still necessary but at the end of the day all you can do is laugh at its flaws. Otherwise the frustration will stop you from enjoying moments like we saw on Sunday night.