Australian football loses one of its true greats 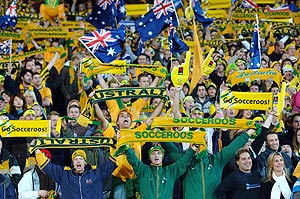 The news that filtered through yesterday that former Socceroos defender and midfielder, Ian Gray, had passed away under ‘suspicious circumstances’ at his home in Sydney on Monday night, at the age of 46, is a bitter one that many in the football community are struggling to deal with.

While I never had the fortune to meet ‘Iggy’, as he was affectionately known, I have vivid memories of watching him run around in the National Soccer League and for the national team.

Indeed, Gray was on the Parramatta Stadium pitch, representing Marconi, in my first ever national league game, the 1989 grand final against Sydney Olympic, and my memories are that of a leader, with a knack for finding the back of the net.

Whether he was playing at the back, or in the midfield, Gray had a real presence on the pitch.

Evidently it was the same off the pitch.

Speaking last night on Fox Sports FC, Mike Cockerill and former teammates Paul Trimboli (country) and Andy Harper (club), spoke very highly of Gray, as a leader, as a funny-man, as an all-round great guy and as a fierce competitor who was the heart and soul of the teams he represented.

Meanwhile, David Zdrilic, speaking on Channel 10, spoke of how he had grown up watching Gray, and later become a close friend and fellow football coach.

“I have known Ian since I was 15 years old … it’s a great loss of a very good man. He was a great player, probably one of the best this country has ever seen. Everyone is just devastated.”

Yesterday the FFA put out a warm press release, in which Frank Lowy spoke of the football community’s shock and sadness at the news.

The governing body, often accused of ignoring its past, was forthcoming with the following details about Gray’s career:

“He was born on 22nd July 1963 and came up through the Manly Vale and Western Suburbs ranks.

An experienced defender or midfielder, he commenced a 12 year national representative career in 1981 when selected in an Australian under 20 team to play in a tournament in China.

He was first chosen for the senior Australian side in the 1984 World Series tournament, and later that year joined the Socceroos on an extensive world tour encompassing matches in China, England, Scotland and Italy.

He scored six goals in the 1984 National Soccer League (NSL) season, his last season at APIA Leichhardt, as the inner-Sydney club went as far as the northern division preliminary final.

After suffering an injury early in a round 25 match against West Adelaide in 1992/93 he was out of action for six weeks, returning to play in Marconi’s 1-0 grand final victory over Adelaide City – his third NSL championship medal.

Upon playing in the 1993/94 finals series, he became the first player to play in nine NSL finals series. He stands as the player with the second-most number of NSL appearances for Marconi, just two matches behind Tom McCulloch.

Although playing predominantly in defence throughout his career, he scored some vital goals for Marconi, including an 80th minute strike in a 2-1 win over South Melbourne in the 1988 minor semi final, and a headed goal in the 1991 elimination semi, which Marconi won over Parramatta Eagles on penalties following a 3-3 draw.

Since leaving the professional football ranks, Ian continued to play at an amateur level for his beloved Maccabi Masters and Team Bondi but mainly turned his attention to coaching and in particular mentoring junior football players.

In 2004 Ian was inducted into the FFA Hall of Fame – Award of Distinction. Ian was also a member of the FFA Appeals committee.

Details regarding Ian’s funeral arrangements will be announced at a later date.”

Other Australian representative honours:
U-20 – 1981 U-20 World Cup train-on squad

A 2-0 win over Argentina! Is that Arnie's best-ever result?

Maybe Australia would have won the Copa America after all? It feels like the sky’s the limit after the Olyroos shocked the football world to beat Argentina 2-0 at the Tokyo Olympics.

A 2-0 win over Argentina! Is that Arnie's best-ever result?

The Socceroos are preparing for the third round World Cup Qualification draw. They are set to find out their next round opponents.

Creating a true home for football in Australia

Creating a true home for football in Australia