Graham Arnold deserves to be given a chance 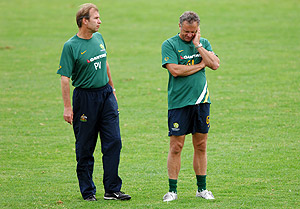 New Socceroos coach Pim Verbeek (left) talks with former coach and now assitant coach, Graeme Arnold, as they watch a training squad made up of A-League players in Sydney, Tuesday, Jan. 22, 2008. Players are vying for a position in the Socceroos team that will play their first World Cup 2010 qualifier against Qatar on February 6. AAP Image/Paul Miller

When Graham Arnold met journalists for the first time as Central Coast Mariners coach this week, he was a cocksure picture of confidence and enthusiasm.

Some football followers might remember a time not so long ago when Arnold wasn’t so accommodating with the press.
But that time is past. Arnold this week began preparations to take over from foundation coach Lawrie McKinna at the Mariners, though he will first finish commitments with the Socceroos.

McKinna has moved upstairs to become football and commercial operations manager – the grandfatherly role many believe for which he is best suited.

Arnold’s appointment, despite long being mooted, brought with it the predictable howls of derision from those remembering Australia’s dismal Asian Cup in 2007 and the Beijing Olympics campaign the following year.

Arnold certainly did show his naivete in both tournaments, and won no fans with his gruff approach at press conferences.

Now he gets another chance at a top job with Central Coast. It is not, of course, his first foray into club management.

But much has changed since Arnold held the reins of the Northern Spirit during the late 90s in the National Soccer League.

The latter two in particular came to rely on his work behind the scenes.

Their backing certainly wouldn’t have hurt when it came to deciding if Arnold still had a role to play in the national team set-up following his failures as head coach.

Having temporarily become perhaps the most despised person in Australian football soon after the Beijing Olympics, Arnold wisely decided to keep his head down when Verbeek took over.

The valuable resource he became to the Dutchman since should not be underestimated.

He has also been handed much of the credit for his behind-the-scenes work to entice a number of promising fence-sitters – Rhys Williams and Shane Lowry among them – over to the Australian corner.

Verbeek told Goal.com in an interview that “Graham Arnold for me knows football, he was a great player himself, he is always honest to me with his opinion and that’s what I like about him. He is a fantastic friend and a fantastic coach to me.

“What other people think about him is only a perception because I’m working with him day-in, day-out. If somebody knows him, I do.’’

So, having proven his worth to those who matter, Arnold now has the task of winning over the Mariners faithful.

But if positive results are the sure way to get fans onside, Arnold would know he must first get his new players believing and playing in his style.

McKinna’s tactics began to grind on even the most ardent of Mariners supporters by the end, but he remained a popular figure amongst the playing group.

He reputedly captured the signature of the versatile Pedj Bojic from Sydney FC in 2008 (despite a better contract offer from the Sky Blues) because the Scotsman saw no problem with the versatile defender’s continuance of his personal training business.

As charismatic as his regular Twitter posts suggested, McKinna’s bond with his players will be hard for Arnold to match.

But this is a man who carved out a better-than solid Socceroos career and managed to salvage his managerial livelihood from the scrapheap through patience, graft and a few thousand frequent flier miles.

He deserves a chance. And if he’s learned from his mistakes, there is every chance that the redemption of Graham Arnold might not yet be complete. 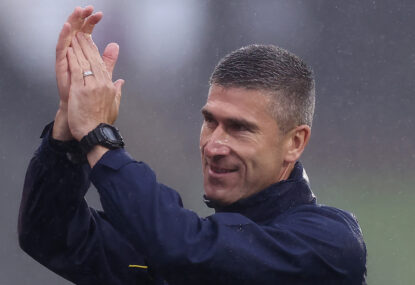