Who is the most unfortunate cricketer of them all? 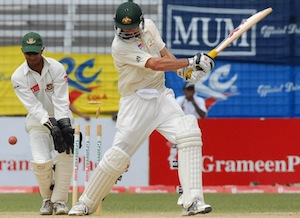 Mirror, mirror on the wall, who was the most unfortunate cricketer of them all? The list is long but I’ll restrict to the freakily unfortunate ones.

Let me start with the cricketer who is in the news, Jason Gillespie, or rather his father Neil, who last week condemned the choice of John Howard as the future ICC President.

In the April 2006 Chittagong Test against Bangladesh, Australia’s fast bowler Jason Gillespie, age 35, scored an unbeaten 201, the highest score for a night watchman. As Bangladesh had scored 197 in the first innings, he had outscored 11 Bangladeshis and Mr Extras.

Australia won this Test by an innings and Gillespie was made Man of the Match and Man of the Series.

Amazingly, this proved to be his last Test match.

The West Indies opening batsman Andy Ganteaume was another unfortunate cricketer. In the February 1948 Port-of-Spain Test against England, he opened the innings, scored 112 and did not bat in the second innings.

Incredibly he was never again selected in Test cricket and retired a decade later with a batting average of 112.00, higher than Don Bradman’s of 99.94. The 89-year-old is still puzzled at his exclusion after his impressive Test debut and, as it turned out, his Test farewell as well!

Similarly, New Zealand opener Rodney Redmond, scored 107 and 56 in his only Test, versus Pakistan at Auckland in February 1973, and was discarded unceremoniously. He boasts of a healthy Test average of 81.50. Move over, Lara, Tendulkar and Ponting!

“Why, why, why were we dumped after such stupendous success,” they may well lament.

There are instances of freaky injuries to cricketers which had nothing to do with playing cricket. Australian wicket-keeper Gil Langley missed a match when he injured his hand by lying on it while sleeping, according to Jonathan Rice in Curiosities of Cricket (1993).

Australian all-rounder Gary Gilmour was practicing bowling in his motel room in Sydney in November 1972 before a Sheffield Shield match when his hand was caught in a ceiling fan.

Ian Greig, brother of Tony, fractured his right ankle in a Sussex vs. Kent match in June 1983 when he fell 18 feet trying to climb into his unit after he had broken his key in the lock. Four years later he was hit on the finger when captaining Surrey against Pakistan. He went to a hospital to have his finger X-rayed and a fracture was detected. As he rose to leave, he cracked his head on the X-ray machine and needed two stitches.

But no one can surpass Bruce French, the English wicket-keeper, in weird injuries.

When touring West Indies in 1985-86, he was bitten by a dog while jogging. He played only three first-class innings and made two ducks.

What else could go wrong? He was net-practicing in Lahore in November 1987 when a throw from a spectator hit him on the left eye which required four stitches. On arrival at the hospital, a car hit him on the leg. After the stitches were removed, he banged his head on a light-fitting as he rose to leave.

I nominate French for an Oscar in clumsiness!

What a magnificent catch from Teague Wyllie! He’d go on to make a century in Australia’s comfortable win.

Marcus Stoinis must have liked that gag, because he used it twice!

Glenn Maxwell recorded the highest ever Big Bash score beating Marcus Stoinis record with 154 not out off 64 balls including 22 fours and 4 sixes.

When I speak to Darcie Brown, even though I can’t see her, I can tell she’s smiling.