Tipping the winners, and losers, of the opening round 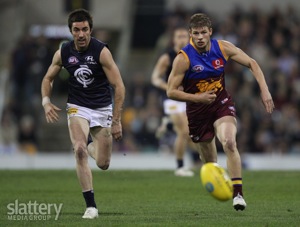 Kade Simpson and Justin Sherman chase the ball during the AFL 2nd Elimination Final between the Brisbane Lions and the Carlton Blues at the Gabba.

With the first bounce of the home-and-away season taking place tonight, excitement in the AFL world is at fever pitch. So let’s see if we can pick a winner.

Richmond Vs Carlton (Thursday Night, MCG)
The big question on everyone’s lips is how the Blues will fare without goalkicking machine Brendan Fevola (traded to Brisbane) and midfield dynamo Chris Judd (suspended for the first three game of the season. Both teams have been far from convincing in the pre-season. Richmond have promised us a new game plan, and we all want to see how Dustin Martin, last year’s no.3 draft pick, handles the big-time. The Blues thumped the Tigers in the corresponding fixture last season, but if they don’t win this clash, there will be plenty of questions asked of them (even though it is only Round 1).
Verdict: Carlton to win, but not by as much as many may think.

Geelong Vs Essendon (Friday Night, MCG)
It’s a tough ask for Essendon to face the might of reigning premier Geelong in Round 1, but, that said, it may also be a good time to play them. Both teams have had solid pre-seasons, but the Cats have had their way with the Bombers in recent times, and it is hard to see the Bombers bucking that trend this time.
Verdict: Geelong by six goals.

Melbourne Vs Hawthorn (Saturday, MCG)
How will Melbourne’s kids go, namely Tom Scully and Jack Trengrove? Don’t expect too much, too early, Demon fans. Hawthorn, meanwhile, has again been hit by the injury curse during the off-season. But the Hawks will head into this clash as favourites.
Verdict: Hawthorn to pull away in the second-half and win by four goals.

Sydney Vs St.Kilda (Saturday night, ANZ Stadium)
Those in the tipping know always tell us to select the home team. But the Saints are coming off a Grand Final defeat and a strong pre-season. Sydney, on the other hand, is expected to take a slide down the ladder this year. A win here, though, could momentarily silence the doubters.
Verdict: Saints to win, but just, in a game that goes down to the final minutes.

Brisbane Vs West Coast (Saturday night, GABBA)
Brisbane coach Michael Voss has taken a number of risks in the off-season, but he has showed his hand. By recruiting a number of experienced players, he thinks his team’s time is now. This game will give us a chance to see how Jonathon Brown and Brendan Fevola function together. West Coast is also excited about a climb up the ladder, but I don’t know if the optimism is justified.
Verdict: Brisbane to lead from start to finish at home.

Port Adelaide Vs North Melbourne (Sunday, AAMI Stadium)
A tough assignment for North Melbourne away from home, but the list, according to the hierarchy, is reason to get excited. Port, meanwhile, will be a hit-and-miss team this season. Don’t expect a top-eight finish, but there will be plenty of surprise wins along the way (and losses).
Verdict: North to start the year on a high with a narrow win.

Western Bulldogs Vs Collingwood (Sunday, Etihad Stadium)
The Dogs have been the team everyone has been talking about (and backing for the flag) over the pre-season. With Barry Hall up forward, and Rob Murphy back from injury, there is plenty to like. But Collingwood also progressed to the preliminary final last season, and have since recruited ruckman Darren Jolly and the tough-as-teak Luke Ball. Like Brisbane, they believe their time is now.
Verdict: The match-of-the-round will see the Dogs win by two goals.

Fremantle Vs Adelaide (Sunday night, Subiaco)
Fremantle at home is a much tougher proposition. But I have the feeling it will be a long season, which will provide a chance to play the kids. Adelaide is, simply, a better team and too disciplined, all over the field, for the Dockers (even at Subiaco).
Verdict: Crows to win a low-scoring contest by four goals.