Selecting the Boks squad for the Tri Nations 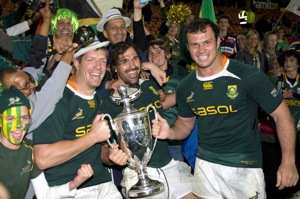 Given my fellow Roar compatriots have compiled a potential Wallabies team, I thought I would take it upon myself to add some international flavour and have a go with the Boks.

This year (so far) has seen the Bulls extend their championship form from last year and the belated rise of the Stormers. Alarmingly, it has also seen the fall of the Sharks and the continuation of the cellar dwelling antics of the Cheetahs and Lions respectively.

Outside of the few notable exceptions, the Bok squad will emulate these fortunes.

The other consideration to be put into play is the extensive international fixtures list, which will necessitate some rotation and blooding of players. With that in mind, I have added a left field selection for up-and-comers or rejigging to accommodate certain players.

Loosehead – Incumbent: Tendai Mtwarira. Form: Guthro Steenkamp. Left Field: John Smit.
It could be the form of the Sharks but the Beast hasn’t exactly set the world alight. Looking at the form players, Guthro has been impressive around the park, making valuable metres, but there are still some questions on his scrumming prowess after being pretzeled on last year’s tour.

Outside chance is that Smit will continue his ballet in the front ranks and move to the left, as per the Sharks this season.

Hooker – Incumbent: Bismarck du Plessis. Form: Bismarck du Plessis, Tian Liebenberg, Gary Botha. Left Field: Adrian Strauss
You could add Smit to the mix, but I think it’s in his best interest to be tied down to a single position and at the moments that’s away from Benn Robinson on the left side of the scrum.

Bismarck still has the inside lane, but I really like what I see in the energetic Liebenberg, who scrums really well and offers great link play.

The same can be said of Botha, with both losing out on the breakdown stakes to the penalty prone Sharks hooker.

Tight Head – Incumbent: John Smit. Jannie du Plessis Form: Brok Harris
There haven’t exactly been many standout performers in this position. So, providing he learns not to throw looping passes in his own 22, then I would plumb for Harris.

Brok has scrummed well and loves getting around the park to make his tackles and take the ball up.

Locks – Incumbent: Victor Matfield, Bakkies Botha, Andries Bekker, Danie Rossouw. Form: Andries Bekker, Left Field Flip van de Merwe, Steve Sykes
Been a fairly low key season from Matfield, which might have a lot to do with his partner in crime being sidelined. Regardless, the heir apparent has put his hand up big time.

The question will be, heir to whom? Given PdV’s willingness to play Bekker as substitute to Botha it would imply he will partner Matfield.

Personally, I see Bekker as Matfield’s replacement and Botha’s someone like Flip van de Merwe or maybe one of the other engine room type locks such as Fondse to make the hard yards.

A Sykes, Bekker combo would also bring a lot to the table providing both aren’t standing in the centres together.

Openside Flank – Incumbent: Heinrich Brussouw/Schalk Burger. Form: Francois Louw, Cobus Grobbelaar. Left Field: Deon Stegmann
With Heinrich injured at the start of the season, it’s hard to tell if he would have adapted his game sufficiently to be as effective within the new interpretations.

Regardless, there have been a few players who have put their hand up. Stegmann has been very good but a bit of a yellow card magnet.

Louw within the Burger/Vermeulen trio has been outstanding.

For giving his all and still having to do the losing captain speech week on week, poor old Cobus surely deserves a spot on the pine. My guess is that that it will be Burger at open side, with either Louw/Stegmann as backup.

Blindside Flank – Incumbent: Juan Smith. Form: Schalk Burger, Dewald Potgieter Left field: Jean Deysel
Juan Smith, the unsung hero of the Bok pack, gets through an immense amount of work in the loose and rucks while being a genuine line-out option.

Deysel is blockbusting ball carrier but he needs more game time. Dewald is to my mind having a break through season and is the future.

Number 8 – Incumbent: Piere Spies. Form: Pierre Spies, Duane Vermeulen
Spies is a shoe-in for the starting spot. Kankowski would have been in contention for the backup spot, but for now it’s hard to look past Vermeulen.

Scrum-half – Incumbent: Fourie du Preez. Form: Fourie du Preez, Dewaldt Duvenhage. Left Field: Ruan Pienaar
The mantle has been slipping on Fourie a bit. Either that or he is returning to the realms of mere mortals, once more.

I would like to see Ruan playing more at scrum-half the position the brought him to the limelight in the first place.

Until then, though, I think we can be pretty happy with Dewaldt, who brings a very snappy service to the table that has kept the Stormers on the front foot.

Flyhalf – Incumbent: Morne Steyn. Form: Peter Grant, Morne Steyn.
As per usual, the South African flyhalf cupboard is full of spider webs. It doesn’t help to develop talent when two of the countries Super 14 teams are playing non-eligible players in Spencer and Goode. Which basically leaves Olivier, Grant and Steyn.

Olivier has promise but has failed to deliver. Grant has come on leaps and bounds, always keen to attack the line and give the ball some air, he has improved his overall kicking considerably.

Morne, though, is still the country’s premier flyhalf, but seems to be having a dip in form. I don’t think the dip will be enough to remove him from his position

Inside Centre – Incumbent: Wynand Olivier. Form: Wynand Olivier, Doppies le Grange Left field: Juan de Jongh, Whitehead, Swanepoel
I was really hoping Eberhson would make the step up this season as by all accounts, the kid has talent to burn.

Unfortunately, he also plays for the Cheetahs which is never going to help your back-line chances.

So that really leaves us with Olivier – the poor mans Jean de Villiers and le Grange. Ok, that was harsh on Olivier, who knows a gap when he sees one but lacks a bit of outright pace, just ask Higginbotham.

Le Grange on a stats base should be the first choice centre by a mile, except he is also part of a team that leaks tries and there are questions about how many were through his channel.

De Jongh has had some success here but it is openly acknowledged he is a retread outside who can only pass to his left.

So Olivier it is, with a specialist like Swanepoel or Whitehead backing up

Wings – Incumbents: Bryan Habana, JP Pieterson. Form: G van de Heever, Killian Left field: Nokwe
There are a dearth of wings in South Africa, some with blistering pace, others with great skills. Very few have the complete package, which is why Habana will again lurk on the left wing.

The right wing leaves something to be desired. JP hasn’t exactly shone this season so I would like to see van de Heever in the mix.

Fullback – Incumbent: ?. Form: Zane Kirchner, Joe Pieterson Left field: Killian, Aplon, Lambie
For position where there was very little depth on Jantes injury and Montgomery’s retirement we suddenly have a wealth of talent: the solid if somewhat unspectacular Kirchner and then the talents of the Percy clone Joe Pieterson, Killian, Lambie and the diminutive ghost that is Gio “the cockroach”.

I feel it’s a year to early for Killian, so Pieterson to start and Aplon from the bench to cover FB and wing.

Not much different to the current test team, but a bit of mix and match with some of the players mentioned will go a long way to getting the balance of new blood and results.