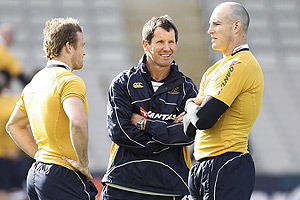 Now in the third year of his coaching term, I thought I would play the devils advocate and ask – are the ARU getting their money’s worth on their much hyped coaching import?

There is no denying the pedigree of his track record with the Crusaders, and the All Blacks up until their 2003 RWC exit.

But the big question remains, can/or is he having the same impact on the Wallabies?

Casting an eye over the performance of the Wallabies to date, the answer would have to be no.

I think that’s a pretty average level of performance from a country that was until recently cemented in the top three in the world.

For reference in terms of peer review in the same timeline.

The major pain on the ledger has been through the playing of fellow SANZAR countries in the Tri-Nations.

Wrapped within these statistics is also a very large gorilla in an All Black jersey clutching to a now seven game winning streak dating back to August 2008.

On the plus side, he has managed a win in South Africa, which is something his predecessors were unable to do.

Unfortunately, that has also been the only away win in the competition, and with the RWC around the corner and across the Tasman, this surely is a large concern.

Added to this, we can also heap the first loss to Scotland in 27 years, the third ever loss to England on home soil, and the largest margin of loss by a Wallaby side.

If it’s not the coach then is it the personnel? Given the zero to hero player a minute syndrome in Australia, surely not?

Personally, I think there are some very good, world class players within the ranks. Just something isn’t setting them cohesively alight, and on the path to the top of the echelon.

Perhaps it’s a psyche thing, with a conflict in the New Zealand versus Australian approach?

Or maybe it’s adapting to the master coaches’ vision that is taking time.

It took Jake White four years to win a World Cup, Clive Woodward seven, and Graham Henry is still trying. So there is still time, but it is running preciously short for Deans, the messiah, and his merry disciples.