What legacy has Pim Verbeek left us? 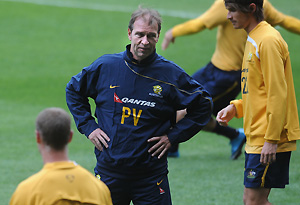 As the dust settles on Australia’s valiant performance in Nelspruit, speculation has turned to who might replace Pim Verbeek at the helm of the Socceroos.

A couple of names have already been bandied about, but we should also question just what sort of legacy Verbeek has left us from his time in charge.

One answer surely concluded yesterday was that whoever replaces Verbeek should be willing to embrace Australia’s natural attacking instincts.

What a difference it made to see Verbeek sacrifice a superfluous defensive midfielder for a more attacking one just after the hour mark, and it’s a shame that was left to the final half hour of the tournament for Australia to finally unlock the shackles.

Granted, things looked to be going smoothly against Ghana in Rustenburg until Harry Kewell’s unfortunate dismissal, but surely there’s a case for Australia’s next coach to adapt a more flexible approach in future, rather than try to enforce a rigidly defensive game plan on players who appear to flourish in a more attacking environment.

Yet, despite his flaws, Verbeek should at least be some credit for the positives to have come out of the campaign.

His decision to stand by the much-maligned Brett Holman in the face of concerted criticism turned out to be a masterstroke, and there was some small irony in the fact that it was Holman’s incessant running which took him into position to score against both Ghana and Serbia.

Holman may yet go on to prove a key figure for the Socceroos, and Carl Valeri is another who comes out of the tournament with his reputation enhanced – so much so that questions must surely be asked of the playing future of the once pivotal Vince Grella in a green-and-gold jersey.

And let’s not forget that despite his obvious disdain for the A-League, Verbeek still managed to steer a squad of mostly A-League players to the 2011 AFC Asian Cup finals in Qatar – where squad regeneration is a must.

However, his oft-repeated claim that “training in Europe is better than playing in the A-League” has been made to look foolish by Ricki Herbert and his resolute New Zealand outfit, with the All Whites stunning world football by recording three successive draws.

Indeed, New Zealand played in Group F as Australia should have played against Germany in their opening game – with respect, but not fear – and with a game plan that was designed to leave nothing on the pitch.

Following a qualifying campaign based almost entirely on defensive football, perhaps it was too much to ask for Verbeek to change his stripes going into the most important match of his career.

But the manner of Australia’s capitulation at the hands of a young German side was the final straw for his many detractors, and the Dutchman was on the end of a brutal excoriation from both media and fans alike following that disastrous opening display.

So what kind of legacy has Pim Verbeek ultimately left us?

He certainly hasn’t furnished the squad with multitudes of young talent, although the likes of Nikita Rukavytsya, James Holland and Tommy Oar obviously have cause to hope that they will feature prominently down the line.

One could argue that the win over Serbia helped to restore some confidence within the squad, however the players themselves were largely responsible for that.

Ultimately, Verbeek’s reign has left us with few tangible results to speak of.

He relied heavily on most of the same personnel who excelled in 2006 – all of whom are now four years older, and most of whom are on the verge of retirement.

And he denigrated the A-League and made it harder to convince sceptics that Australia’s domestic league is a competition worth taking seriously, where young players are afforded a pathway to the national team.

Sadly, Verbeek leaves us having established no discernible legacy at all.

And that unfortunate fact must come into the reckoning when Football Federation Australia determines the next Socceroos coach.