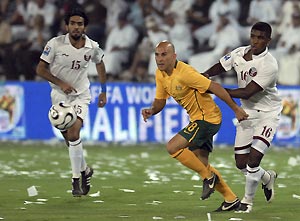 Football politics is a hard ball game, where ambition, treachery, corruption, political and economic influence, perfumed or manured by vast dollops of money, dictate the outcome of every major decision. It is this heady milieu that makes it almost inevitable that Qatar, a fabulously rich country, will win the hosting rights to the 2022 Football World Cup.

An informed source has told me that the FIFA president, Joseph S. Blatter, Sepp Blatter to the punters, wants another term as presiding official of world football. But the chairman of the Qatar’s 2022 Bid Commitee, His Excellency Sheik Mohammed bin Hamad bin Khalifa Al Thani, has the numbers to prevent this.

A deal will be done to square this circle.

Blatter will get his final term as present. And Qatar will win the hosting rights to the 2022 Football World Cup.

A deal cut this way effectively kills off the bids from the USA (which could not win its latest Olympic hosting bid); Japan (which has already hosted a Football World Cup); and Australia (which is out its league in a world of big finance football politics played for the highest of stakes).

The heart of the Qatar bid, aside from the politicking of getting Blatter another term as FIFA president, involves a geo-political consideration that the Middle East region is a powerhouse and a powder keg.

FIFA, like the IOC, likes to think of itself as an organisation that uses sport, in this case football, as a force for peace in the world.

It has 2,000 pages of supplementary documents and covers in great detail all the relevant issues ranging from accommodation, transport, security, environment and stadium infrastructure. This massive documentation is backed up with all the required government guarantees and agreements.

The bid is an example of money not talking but actually shouting out its power and authority.

It is not entirely beyond the bounds of belief that if a successful Football World Cup is held in Qatar, that FIFA could be in line for a Nobel Prize for Peace. The appeal of this to the marketing programs and self-esteem of FIFA, which boasts it has more member nations than the United Nations, cannot be over-estimated.

Qatar’s 22-chapter bid document makes the case that if it wins the hosting rights, 2022 will be the first World Cup held in the Middle East.

“In Qatar, history and the future will come together in an historic choice of Host Nation, in a global age with medias and technology bringing continents closer together – Qatar is truly in the Middle, neither East not West. Qatar proposes a World Cup that will perfectly reflect the FIFA slogan: ‘For the Game: for the World.'”

Qatar has the third largest gas reserves in the world:14 per cent of all the known resereves. It has the highest or second highest (after Liechenstein, depending on the source) per capita income in the world, and the fastest growing income.

It has the tiny population, however, of 1 million, swollen to about 2 million with foreign workers and business people.

On the face of it, it is improbable that such a small country in terms of population, with a climate that makes it unbearable to be outside for most of the year, could hope to host a football tournament that involves 32 teams and 12 stadiums.

But the bid makes clear that all the stadiums will have “ground-breaking” cooling systems, fan zones and training grounds: “Fans, players and officials will be able to enjoy cool and comfortable open-air conditions, not exceeding 27 degrees celsius climate.”

The state of the art cooling modules and some of the modular stadiums will be given to developing countries after the 2022 tournament. The carbon-neutral technology developed for the tournament will create enough solar power for energy to be put into the national grid when the stadiums are not in use.

Europe, also, because of the convenience and time-zone considerations of a tournament based in Qatar, together with the deals that the major nations can tie-up with Qatar and its supporters on the Arabian, will come on board.

Blatter will bring in the South American countries.

It’s hard to see in all of this just where Australia hopes to get votes for its bid.

Its football team is higher ranked than Qatar’s. But so is New Zealand’s. Australia may be new territory for FIFA to bless with a World Cup tournament.

But so is the Middle East.

The Qatar football team is out of its league on the field. But off the field, Qatar is very much a big player in world and football politics. This weight will be too much for FIFA to resist when it comes to naming the host of the 2022 Football World Cup.