NRL grand final is just too close to call 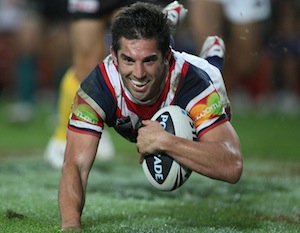 However, as time has gone on, I’ve been more and more certain about one thing on Sunday: the result will come down to an individual moment, brilliance or bastardy, and that will determine the fate of all 34 players and two coaches.

It’s a cruel game but the whole culture of a club can seemingly be defined by one individual moment. Would people talk about St George’s constant “choking” in grand finals if Anthony Mundine had managed to put the ball over the line?

Individual moments can turn games. Will someone repeat Scott Sattler’s effort in 2003 or Martin Bella’s 1994?

Both teams will be nervous and that can only increase their chances of a William Zillman moment (to coin a phrase). And what happens when it goes upstairs, how confident are we the man with all the replays and camera angles isn’t going to make an absolute tit out of himself?

So the grand final could come down to a stupid off-load or a dumb penalty. Step forward Jason Ryles. Ryles has said he wants to prove to the Dragons how they were wrong to axe him. If I was a Roosters fan I’d want Jason to be going in without the feeling that he had to come up with the big play.

I’ve read lots of match previews which have said it could be hard for St George if they fall behind. I’m yet to read one which says that it will be easy for the Roosters should they fall behind. In fact, I’ll make the bold prediction that which ever team is behind with 20 minutes to go will not be entering the final quarter in their ideal position.

Yes, the Dragons play a pretty conservative brand of football. But there is rarely a better style in a grand final; it could be the Dragons have been practising for this game for the last two seasons. Let’s not kid ourselves, few teams go out to razzle dazzle in a decider.

The coaching battle will be tremendous. Wayne Bennett has done it all before but every time he takes a team to the big game he seems to come out with something special. Just look at what he achieved with the Kiwis at the World Cup.

Brian Smith on the other hand will prepare for this week with the company of a huge gorilla on his back. Smith will no doubt be dotting all the i’s and crossing all the t’s as he looks for that first premiership, but should his side fail it is unlikely to be due to anything he did or didn’t do – unless he has some sort of Warren Ryan influence on his team like when Ryan replaced Roach and Sironen in the 1989 grand final.

But Smith has worked wonders just to get his team to the decider. The job is already his for as long as he wants it (unless Roy Spagnolo is suddenly put in charge of the Roosters).

But who’ll win? I don’t know. Ask me with five minutes to go and I’ll tell you who might just get home.

Finally, what a weekend of sport awaits. Surely our leaders can agree to mandate that both major codes always play their grand finals on the same weekend.