Why the Independent Commission won't work 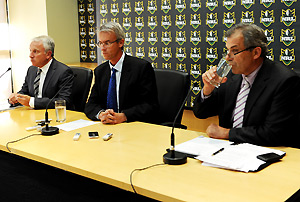 The NRL clubs proposing the Independent Commission have attempted to gain traction for almost two years. However, it doesn’t have the backing of all the game’s stakeholders. Let’s analyse the basics of the proposal to see why.

The NRL clubs suggest that there is currently no “independence” in the structure because News Ltd controls 50 per cent of the national competition (the ARL hold the other 50 per cent).

This may be true for the national “NRL” competition, which is jointly managed by the ARL and News Ltd as a result of the Super League reunification agreement. But it is not true for the “ARL,” which is responsible for the game of Rugby League throughout Australia.

The ARL is the umbrella organisation that distributes funding throughout the regions, manages representative football, and controls the structure of Rugby League competitions. The NSWRL and QRL must both agree to any structural changes, and as these bodies are elected by the rugby league community, they are independent of corporation interference (or should be by definition).

The 16 current NRL clubs (many of which are actually companies, not clubs) currently do not have a vote in the distribution of proceeds or the structure of rugby league – and nor should they.

That is the job of the ARL, the NSWRL, the CRLNSW and the QRL.

So the group of 16 current NRL clubs – who currently have no vote in the structure of rugby league in Australia – are proposing an Independent Commission whereby they are suddenly given control of Australia-wide funding and the membership of the national competition.

To assist this, the current NSWRL board (who are the same persons holding positions on the ARL board) has agreed to vote itself out of existence – which effectively removes all representation of NSW regions and clubs that are not currently in the NRL competition.

The QRL are resisting the proposed Independent Commission.

The QRL are elected to look out for Queensland regional rugby league and that is what they are doing. They question how a national body can be “independent” if it is controlled by 16 clubs rather than non-aligned elected officials.

And this is a bad model.

At the heart of the issue is just one question: should the funding and structure of rugby league throughout all of Australia be controlled by the 16 current NRL clubs/companies at all?

Of course, the current proposal is a total joke as it gives overall control to the clubs.

But should they have a vote in all rugby league matters at all. Or maybe just the national NRL competition? Or should they simply be the invited guests of the ARL’s competition?