Ricky Ponting’s Australian team do not have all the answers. They will return from India with a whole new set of questions.

Why have we lost three Tests in a row?

Where has Michael Clarke’s form gone?

What is wrong with the batting?

Why are starts not being converted?

Will Marcus North ever become consistent?

What can be done about Nathan Hauritz?

And is Brad Haddin really a better Ashes option than Tim Paine?

In little more than a month, Australia will take the field in the first Ashes Test against England at the Gabba, with all the rich expectations of a home side seeking to regain the urn.

But a series defeat in India to follow an uneven display against Pakistan in England has left the team at a low ebb, ranked fifth in the world and dealing with their longest Test-match losing streak for 22 years.

It is not the most promising ground from which to launch an Ashes campaign.

As captain Ricky Ponting sees it, any problems confirmed or magnified in India should be resolved by a return to home comforts.

The loss to India in the second Test in Bangalore was ultimately a hefty one, but Ponting said there were few “gaping holes” in his team that could not be remedied by a generous domestic program between now and the first Test at the Gabba.

“The scoreline was pretty flattering for the India team so we have to look at the positives we’ve created over the last couple of weeks,” said Ponting.

“In saying that, all any of us can do when we go back home is play the best cricket we can.

“I’ve got to make as many runs as I can as do the rest of the players in this current squad.

“Anyone who is out of this squad at the moment, if they keep scoring runs and keep putting their hands up, we’ll wait and see what happens when the selections come around for Brisbane.

“I don’t think there are too many gaping holes in our team.

Looming largest among the questions confronting Ponting is the form of vice-captain and No.4 Clarke, scorer of only 35 runs in four innings in India and only one half-century in eight since he switched with Mike Hussey in the batting order.

Ponting believes Clarke’s problems were more symptomatic of India than anything else, as he recalled his own struggles on the subcontinent.

“We’ve all had those series in India,” said Ponting.

“I had about four of them in a row where you come over here, try lots of different things, work hard and not get the results you want.

“You don’t have to worry about Michael Clarke. He knows his own game very well. The fact that he’s moved up one spot in the order, I don’t think that’s got anything to do with the runs he has or hasn’t scored.

“He’s a world-class player and I’m sure when the Ashes comes around, you’ll see him in good touch.”

Among others, grizzled opener Simon Katich squandered numerous starts and No.6 Marcus North maintained his impeccable record for inconsistency by playing one significant innings surrounded by three failures.

At the bowling crease, Ben Hilfenhaus was outstanding, though lacking in fortune, while Mitchell Johnson lifted his level from England but still struggled to put the ball exactly where he wanted to.

Hauritz endured a nightmarish series that revealed an alarming lack of faith in his methods from Ponting, who revealed he had been trying to change how the finger spinner operated for more than a year.

There was trouble in one area of success, too – young wicketkeeper Paine was only outdone by Ponting and Shane Watson in terms of runs scored, yet is destined to be dropped for the returning Brad Haddin at the Gabba.

While not ignoring these points, Ponting argued his side would grow in power at home.

“There are some issues there we need to deal with,” he said.

“We have to get over them quickly but I think we shape up well in Australia.

“I think our team generally is better suited to our Australian conditions than here, which makes some of our standout personal performances that little bit better over here.

“We were coming off no cricket, we were in conditions very foreign to us and we’ve managed to serve it up to the No.1 team for probably nine out of the 10 days we’ve played.

“There’s been some good stuff there but not when it mattered most.”

Optimism aside, Ponting conceded there was one matter that must be addressed most urgently.

“I knew it was a long time ago. I wasn’t playing in 1988, although it feels like it,” Ponting said of the present losing streak.

“We have to get off that train, for sure. We have to start winning Test matches.”

Even by BBL standards, this is a very BBL thing to have happened. 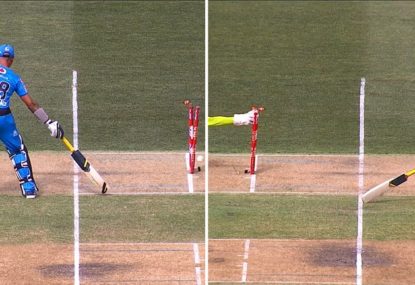 The stare from Riley Meredith… 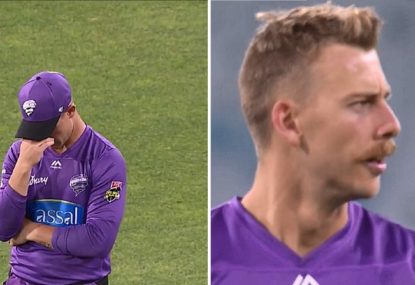