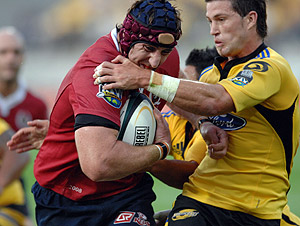 Nationalism divides as it unifies. I am, you aren’t, that sort of thing. It serves us well in times when we need to be together but ends its useful service somewhere between the Cronulla Riots and the Walkabout Pub.

If we can contain it to the sporting grandstands that’s probably a good thing.

My mate tells a wonderful story about how after the 2003 world cup game between New Zealand and Tonga, Reuben Thorne, the then All Black captain, bailed up a lout in a Kiwi jersey who was brawling on Caxton street.

“When you’re wearing that jersey you’re representing your country,” Thorne told him. National pride should always be harnessed by that sort of example.

The Chilean response to the rescue of their miners last week was national pride at its most fervent. Euphoria of the type displayed by men and women in the streets of Santiago who shared little more than elected government with the miners is hard to deride.

Indeed, why should they not feel proud of the collective efforts of their countrymen and women.

Chile is a nation on the rise, a very rapid rise in fact from rather more terrible conditions than most western countries have experienced. Perhaps their pride is more a result of what they have overcome than what they have achieved.

What does it matter? It was a literally uplifting story that struck a particular chord with me due to my own time underground in the gold fields of Orange and Parkes.

These little personal links with a news story make them all the more real. When the news is good news you can’t help but share a little in the celebrations and turn a little smile inward upon your own memories.

Perhaps this is why the news of Van Humphries’ selection in the Wallaby touring squad has been so well received amongst Australian rugby supporters.

This is in no way to suggest that his form isn’t the key factor in either his selection or our response to it. Van the Man outplayed every other Australian lock in the Super 14 series this year and most supporters know it.

Neither is this an attempt to suggest that Humphries is anything but professional. That he is able to produce the best rugby of his career at the age of 34 attests to the commitment to fitness and improvement he demands of himself.

But something in me, and I suspect many other amateur and armchair supporters, finds it so much easier to identify with Humphries than some of the rest of the squad.

If I happened to run into Van in a pub right now I would insist upon funding his inebriation and then promptly update my facebook status with witty recollections of my night out with the greatest soon-to-be Wallaby ever lol.

I wouldn’t do the same if it was Mumm.

There’s more to it than just Humphries’ age. Its also more than just his chance at the incredible achievement of being the Wallabies oldest debutante.

Like an actor perfectly cast and directed, Van fits the role of what I want a Wallaby to be. Unpretentious, unpampered. Tough without needing to make a show about it he looks exactly like a bloke from Moree should.

He’s not got there the easy way either. Call him a journeyman, I’d call him a survivor. From the Reds to the Waratahs then back again, he went across the ditch to North Harbour, all the way over to Italy, halfway back to Japan, home to Queensland and all the while he keeping the fire going.

For ten years he did what he had to do and he did it so far below the Wallaby selector’s radar that he must have carried more than enough doubts in his kit bag.

This is why Van appeals. Very few of us get life handed to us on a plate. We try, we fail, we find another way. We get disappointments, we get over them. We have dreams and sometimes we dare to put in the hard work to make them come true.

In this way we share something with Humphries that players who go straight from schools, to academies, to representative rugby seem to miss out on. Maybe it is only in our perception but in the growing ‘us and them’ relationship between elite sportsmen and their supporters, Van feels more one of us than them.

I sincerely hope he gets a test cap on the end of season tour and, on a much smaller scale than the Chileans, I will share in a sort of national pride that a bloke like Van, at the tail end of such a career, still has enough fight in him to do justice to the Australian jersey.

In this article, I will look at the possible back lines that Dave Rennie may decide to opt for in 2020.