New Zealand cricket is at its lowest point 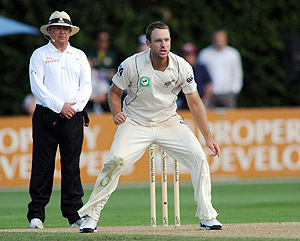 New Zealand cricket has just hit its lowest point in their history. An utterly demoralising and unacceptable 4-0 whitewash to the previously tamed Bangladesh has brought the Black Caps to their knees.

The fall out should show little mercy to those at the forefront of the operations. The axe has to wield and those who do survive the chop need to be ruthlessly reprimanded. As a Kiwi fan, this was an embarrassing time as the whipping boys of international cricket turned the form guide on its head.

However, the result has been a long time coming and I am honestly glad this result has occurred as perhaps now something will change at New Zealand cricket. Look back to the Andy Moles era and most importantly his dismissal at the hands of player power.

Brendon McCullum and Daniel Vettori notably sought more control over the national side. The way the players won over the coach was testament to Justin Vaughan, the inept CEO of New Zealand cricket.

Vaughan possesses a weak character, seemingly a push-over to anyone who threatens him. Sight the lack of quality international teams visiting Kiwi shores over the past summers, and on the rare occasion they make the trip, it’s a two Test series at best.

Back in England in 2006, he gave in to the cash hungry egos in the side and enabled them to finish their IPL commitments before joining the less fortunate in the team. He has also given in to Cricket Australia’s wishes to not hold the ‘annual’ Chappell-Hadlee trophy this summer.

The Moles saga was the breaking point of the entire farce that exists in the boardroom.

Here are my ten ways for the Black Caps to regain competitiveness on the world stage:
1. Sack Justin Vaughan (see above).
2. Relinquish Daniel Vettori of the captaincy. Despite his fantastic cricketing ability, Vettori has gained too much power over the team and seems to be the image of player power. Drop him back to his original number eight batting position, where he thrives.
3. Give Ross Taylor the on-field captaincy.
4. Severely reprimand Brendon McCullum and drop him to number seven in the batting order in ODI’s and drop him from test matches until he regains first class form.
5. Sack Mark Greatbach whilst making pleas to Steve Rixon and John Wright to take complete control of the side.
6. Hire Martin Crowe permanently in a batting coaching role.
7. Rid of Peter Ingram, Shannon Stewart, Matthew Sinclair, Craig Cumming, Brent Arnel, Gareth Hopkins and Nathan McCullum for all eternity. Mediocrity doesn’t cut it at international level, first class journeymen should stay that way.
8. Plead to Scott Styris to reignite his test career and undertake a leadership role within the team.
9. Give Kane Williamson a permanent number five position in both forms of the game, even if runs don’t come immediately.
10. When selecting young talent, give them an extended run playing a consistent role within the side.
11. Recognise New Zealand has a small talent pool, and when players like Ross Taylor, BJ Watling, Martin Guptill and Jesse Ryder emerge, nurture them onto the international scene.
12. Hire someone who knows how to face spin bowling, perhaps Saqlain Mushtaq in a permanent role.