Bring back Warnie as Ashes captain 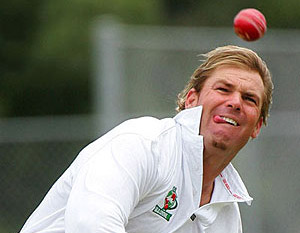 Call me crazy, call me kooky, but allow me for one moment to entertain the idea of bringing back Shane K. Warne as captain of the Australian Test cricket team for one last Ashes hurrah.

Ok, I concede it is a crazy notion and it will never happen. However, in an ideal cricket world devoid of politics, egos and complacency, it makes sense. Doesn’t it?

Just imagine the great leg spinner returning to the much maligned Australian Test side. It would be massive and the Ashes landscape would change dramatically.

His return would bolster two main areas which many perceive as massive problems – the captaincy and spin bowling options, or lack thereof.

Warne is the greatest captain Australia never had. If it were not for his off-field indiscretions, he could’ve become the modern day Richie Benaud.

In the few opportunities he was afforded the captaincy in the one-day arena, he demonstrated that he possessed a fine cricketing brain and the passion to lead his country on the cricket field.

The current captain, Ricky Ponting, isn’t necessarily a bad captain; it’s just that he isn’t a GOOD one.

Ponting’s leadership is built on his magnificent batting prowess and his ability to lead by example. This alone warrants the respect of his teammates.

However, this just isn’t enough.

When the chips are down, Ponting displays poor body language and gets sulky, but more importantly, when the going gets tough, he runs out of ideas fast.

He also doesn’t possess the knock-out punch tactics required for when the team is going in for the kill.

In the last test against India, he blamed the field set for Nathan Hauritz on Hauritz himself, claiming that’s the field the off-spinner wanted.

That’s not good enough Ricky. If that was the case, how about stepping in and changing it up? You’re the captain after all!

Which leads me to the next area of concern – his name starts with ‘H’ and ends with ‘auritz’.

I’ve been a Hauritz-basher from day dot. How the off-spinner got into the Australian test side in the first place is baffling, seeing he was playing second fiddle to Beau Casson at NSW at the time.

I turn my head in disappointment every time I watch Hauritz float down his juicy, tantalising pies that turn at 0.05 degrees, waiting to be walloped by some flat-track bully.

The English batsmen will be licking their lips, especially Kevin ‘FIGJAM’ Pietersen who feeds on poor, unimaginative bowling like a starving pig.

KP is in poor form at the moment, so he’d be ravenous for some delicious runs-in-waiting from Mr. Hauritz.

Enter S.K. Warne and the English batters, bar perhaps Pietersen, will be found cowering behind the cricket nets and chewing their fingernails off.

Warne’s inclusion would also give the selectors a chance to slot Steve Smith at No. 6 in the batting line-up, and give him the opportunity to bowl as Warne’s understudy, if you will.

So, Cricket Australia, I implore that you dump a wheelbarrow full of cash at Shane Warne’s doorstep and tell him you’ve got one month to get ready, because glory beckons.

Is it really a crazy idea? Perhaps. Perhaps not.