How Test cricket can be improved: Part II 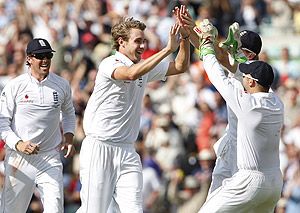 England's Stuart Broad, centre, celebrates with teammates the wicket of Australia's Brad Haddin on the second day of the fifth cricket test match between England and Australia at The Oval cricket ground in London, Friday, Aug.21, 2009. AP Photo/Kirsty Wigglesworth

We continue the second part of cricket rules with contributions from Sheek, the auditor general for cricket; Brett McKay the voice of reason; Kersi, The Roar’s Nostradamus and Geoff Lemon The Roar’s Che Guevara. I am sure my colleagues will not begrudge my so anointing them.

Sheek: Allow me to begin with an observation – the ability of test cricket to survive will depend on the determination of administrators and the players themselves to ensure its perpetuity.

However, as each decade passes, the emotional tug of test cricket is diminishing as newer generations find it easier to make money in the shortened form of T20 cricket.

Anyway, here are some suggestions from me.

2. Bring back the “fear factor” to batting. Okay, this is a tricky one. I appreciate the dominance of bat over ball is cyclical, but today the batsmen enjoy so many natural advantages over bowlers – batting friendly pitches designed to ensure a test lasts five days; covered pitches, well manicured outfields & use of excellent rollers; the latest hi-tech body and head protection. I find the helmet grills to be an abomination to look at. I say – “remove them”. The batsman’s temple is still protected, but it opens his face – nose, mouth, jaw and cheek – to potential damage.

That’ll bring back the fear factor! Of course, it won’t get past the increasingly choking occupational health and safety rules and corporate duty of care.

3. Enforce compliance with “4 minutes per test over” convention. Reduce time wasting, such as batsmen ‘farming’ between deliveries and captains vacillating over field changes. Costs of purchasing tickets to live events is now exorbitant. Patrons are entitled to expect more quality for their money, and more action packed drama.

Just briefly, other suggestions. Bring back the ‘one local umpire and one foreign umpire’ convention. Local umpires are now being denied the opportunity to stand in home tests, unless they’re on the official test umpires roster.

They also have an intuitively better understanding of home grounds, conditions, players, crowds, customs and protocol. Use the technology. Media uses it ad nauseam to embarrass umpires, so give the umpires the same advantage to double-check their rulings.

Brett McKay: Two obvious changes need to be put in place now, and both will have instant effect on how Test Matches are played and viewed. Both changes, coincidently, have been soapbox topics of mine for a little while now, so I figure if I repeat myself enough, one day I will be heard!

The ICC brought the UDRS into use in Test cricket, but then left its implementation up to hosting nations and for local broadcasters to foot the bill. Instantly that means some countries can afford it others can’t, and some countries will use it and others won’t.

It gets worse; the countries that can afford it won’t use it!

If the ICC is serious about improving decision making by umpires – which was already hovering around 93-94 per cent without the technology anyway – then they need to enforce its use across the board AND pick up the tab. There can be no ‘haves’ and ‘have nots’ with this, it has to be consistent or not at all.

I’ve said this before about slow over rates and I’ll say it again. The problem will not go away until the teams are punished the only way they’ll feel it directly: on the scoreboard.

The instant match referees start docking x number of runs per over not bowled by the scheduled close of play, the teams will very quickly smarten up and most certainly hurry up.

This practice of ‘field setting by committee’, where the captain, vice-captain bowler, and all affected fielders discuss field changes is, as Vinay rightly points out, short changing the paying public.

Fines aren’t working, clearly, so the only source of actual pain is the scoreboard.

And heaven help the first captain who loses a Test series because of slow over rate penalties.

Geoff Lemon: The crucial thing is the contest between bat and ball. Runs have bloated. Once an average above 50 was the mark of true greats, now its par. It would be fascinating to see which contemporary batsmen could handle facing the great West Indies pace quartets without a helmet, or Larwood and Voce on juicy green pitches (let alone which tailenders).

What were once twos or outfield catches have become fours and sixes. Boundary ropes should be a standard distance from the fence (just enough to reduce the risk of sliding injuries). Adapting to different grounds is part of the challenge. Abandoning play for bad light should only happen in extreme circumstances (though batsmen should still be able to choose to continue if they wish).

We should encourage green pitches, cracking pitches, dustbowls, anything that provides a challenge and therefore a spectacle. Let pitches go uncovered in the lead-up to matches. Low-scoring Tests are often the most interesting.

Grounds that don’t produce competitive pitches should be barred from hosting internationals for a certain number of seasons.

90 overs in a day used not be any problem at all. I’m not convinced about abolishing the dead-ball rule, but bowlers shouldn’t have to wait for batsmen. If the batsman wants to garden, he’d better be quick.

The third umpire should monitor no-balls. But I would take this further, and have the third umpire double-check all dismissals and appeals immediately with Hot Spot, Snickometer, and replays.

This would not slow down play significantly if replays were provided quickly. The third umpire would not be making a new decision, just checking to see there was anything obviously wrong with the original one.

Thus if a not-out is given, play continues while the third umpire verifies it. If it proves clearly incorrect, that batsman is out, and any runs scored or balls faced after the appeal are struck from the record. Runs scored or wickets lost by his batting partner stand. Most decisions could be made within a couple of deliveries.

For dismissals, use the red and green lights to confirm or overturn a dismissal. A batsman who knows he’s out (edge behind, etc) must leave the field immediately. One who could justifiably suspect the decision was wrong can meet the new batsman halfway off and wait with him for confirmation. The answer dictates which one goes to the middle and which goes off. This would take very little time out of the day’s play, and ensure almost absolute accuracy in decision making.

Kersi Meher Homji: There should be at least 100 overs bowled per day in a Test. In the years gone by, bowlers finished 100 overs a day, no problems! That too 8-ball overs when Australia was involved before 1978.

Replace the slim sight screen with a much wider one. So much time is wasted in moving the sight screen to the left and to the right whenever a right-hander and a left-hander are batting.
Limit the distance allowed to a bowler for the run-up.

A no-ball or a wide should count as two runs instead of one run. But no extra ball should be given. At times it becomes an 8 or 9-ball over. We can fit in a few extra overs if this rule change is brought in operation.

Bowlers like Mitchell Johnson and Zaheer Khan bowl too many balls outside the off stump. This slows down the game. The breadth of the side crease should be reduced to enable such off-beam out-swingers to.

This is over to you now, Roarers, and we all look forward to your studied responses.