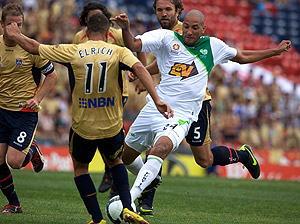 With Nathan Tinkler providing a raft of positive press for the Newcastle Jets, it’s worth a look back at the history of the city in football’s premier club competition.

The NSL – the Phillips Soccer League – kicked off in 1977 and Newcastle KB United entered the competition the year after. But club football in Newcastle goes back a lot further than that, with clubs such as Adamstown Rosebuds well into their second century of existence. Newcastle is known as the cradle of football in this country for a good reason.

To say Newcastle KB United took the National League by storm is an understatement. They were an instant hit, averaging 8,500 fans to each home game in their first season, and 10,200 in their second. KB United drew a crowd of 18,367 to a home game against Sydney Olympic in April 1979, a National League record which stood until Northern Spirit broke it with their first ever game in 1997.

A relatively well-known overseas player by the name of Bobby Charlton donned a KB shirt for a guest stint in 1978. A home-grown kid who would go onto dizzying success by the name of Craig Johnson played for them in his off-season from Middlesbrough in their early years (could you conceive of that happening nowadays?).

A less well-known fact is that KB United were probably the most recognisable PSL team to a great many residents of northern Sydney in the late 70s and early 80s. This was because a lot of homes in the far north of the city picked up NBN television on their home antenna (sometimes clearer than the Sydney channels) and KB games were shown on NBN every Saturday afternoon. This was a more friendly broadcast slot than Channel 10s “Phillips Top Soccer”, which eventually ended up buried in some graveyard timeslot.

For all their crowd-pulling power, Newcastle KB United couldn’t find success on the park. The closest they came was in 1983 when they could have won the title on the last day of the season in a thrilling 5-horse race with St George, Sydney City, South Melbourne and Preston. They lost their last game to the Frank Arok-coached St George 2-1, who clinched the title (a first-past-the-post-title) as a result.

In 1984, Newcastle did taste success when they won the National Cup with a 1-0 win over Melbourne Croatia in the final. Coached by local legend Willie Gallagher, this would be the city’s only trophy for 23 years.

By 1986, the club was competing as Newcastle Rosebud United, funded by the local Adamstown Rosebuds, who can lay some claim to being Australia’s oldest football club.

By now the National League was a two-conference league of 24 teams but the end of 1986 was the year the league was consolidated and 10 teams were cut, by way of a complex format of results, facilities, crowds and a whole lot of other stuff ASIO would have been hard-pressed to crack.

Nevertheless, Newcastle came into their last home game knowing a win would put them in the semi finals, and more importantly, would secure their National League status. That home game was against the Frank Arok-coached St George again – who won 2-1 – sending the city tumbling out of the NSL until 1991.

Arok carried a degree of guilt over his role in denying Newcastle twice in 4 seasons, and went about trying to help the city retain its National League status. In 1988, he agreed to bring the Socceroos to Newcastle for an exhibition match against Newcastle Austral, who were the city’s NSW State League representatives.

Newcastle Austral played out of Austral Park, Birmingham Gardens, and on that August night an estimated crowd of 10,000 jammed the ground. It was the catalyst for a renewed push for the city to be part of the NSL. Austral Park was upgraded, a sponsorship with BHP was finalised, and a club that was started by members of a migrant camp in Heddon-Greta in 1951 became the Newcastle Breakers National League team 40 years later.

The team wore red and blue, the same colours as the wildly popular Newcastle Knights rugby league team (themselves only 3 years old at that point) and their “inaugural” coach was Bruce Stowell. One of sport’s terrible ironies occurred in 1991: the Breakers were one of 3 teams to be accepted into the NSL. One of the 3 clubs that made way for them were the Frank Arok-coached St George.

The Breakers endured a tumultuous nine seasons in the NSL. The perception in the early 90s was that the club was wasting money on expensive and unproven imports and ignoring the fine local talent base at their disposal. The club did manage to attract a lot of local-lads-made-good back to the city, including Ralph Maier, Bobby Naumov, David Lowe and Graham Jennings.

However, by 1994-95, the club’s finances were in such a parlous state. They withdrew from the league for a season, returning in 95-96. The last season for the Breakers was their most successful, as they missed the play-offs by only four points in a convoluted 34 game season.

Con Constantine bought the club in 2000 and moved them straight back to their first home ground, Marathon Stadium at Broadmeadow. It seemed the boom times were back as 15,123 fans turned out for the newly named Newcastle United’s first home game.

Crowds stayed strong for three seasons, hovering between 8-10,000, but the league itself was staggering to its final resting place by then. Newcastle crowds caught the inertia, and only 3,200 were on hand for Newcastle’s final home game in the penultimate round.

Of course, Constantine was back with Newcastle football when the A-League kicked off in August 2005. He named the club Newcastle United Jets but the FFA were somewhat leery of what became known, unfairly, as “old soccer” and so the “United” part of the name was never popularised.

In Season Three – or “Version Three” if you like your marketing – the Jets finally gave the “cradle of Australian football” what had eluded it. Newcastle beat Central Coast Mariners 1-0 at “neutral” Sydney Football Stadium in 2008 to win the A-League title.

Garry Van Egmond wrote his name next to Willie Gallagher as the only coach to win silverware for the city.