Is it really just Ponting-bashing? 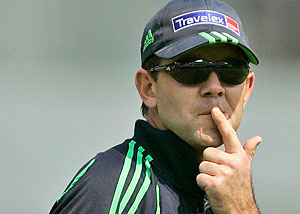 One extreme says he’s a hack and a no-hoper. The other says that’s nothing but Ponting-bashing. As ever, the truth lies somewhere in between. Ricky Ponting is not in fact the worst captain in Test history. It’s just that he’s never been a very good one either.

And with the failed Indian campaign behind us, we can safely say by now that he’ll never become one.

Captains make a Test match. The West Indies arrived at the MCG in 2000 having already notched three heavy losses to Steve Waugh’s men. When their openers came out to bat in their first innings, they were greeted by an extraordinary scene.

Five slips. Two gullies. A short leg perched under the batsman’s nose. The only man in the outfield was at long leg. Everyone else was catching. Even Andy Bichel found himself at fifth slip.

Only the bowler was in front of the batsman. From point to square leg were acres of open space. Any simple forward defensive would roll away for easy runs.

But the sheer, all-out aggression of the move was the ultimate psych-out. For well over half an hour, Glenn McGrath and Jason Gillespie sent down maiden after maiden. Sherwin Campbell and Darren Ganga hopped and poked and prodded, strangled by their own doubt.

They didn’t score a run until the 8th over. The bowlers racked up something like 11 maidens between them. And while the uneducated observer might have opined that nothing happened, the sheer tension made it the most compelling passage of Test cricket I’ve ever seen live.

It would be easy to say this was only possible because Waugh had great bowlers. That’s missing the point. He used those bowlers in a way other captains wouldn’t have dared. It was this that so spectacularly won the mental struggle with his opponents, before a ball had even been faced.

The stats between the two are relatively even. Ponting has captained six more wins than Waugh from 16 more Tests. Waugh’s winning ratio of just under 72 percent trumps Ponting’s still-excellent 64 percent.

Waugh captained just nine Tests without Warne and McGrath, for five wins (55 percent). Ponting has skippered 38 since their retirements for 20 wins (52 percent).

But ratios are a pretty poor means of judging captaincy. Of all aspects of cricket, this is the one which is most art and least science. The measure is something entirely less tangible.

Stephen Fleming was widely regarded as a great captain, though the Kiwis hardly swept all before them during his reign. His virtues were tenacity, innovation, adaptability. Under him, the Black Caps constantly punched above their weight.

Waugh, for all his success, was a great captain not because of his winning record, but because of the way he went about achieving it. Captaincy is about putting your team in the best position to win the match. The actual result is academic.

When he was first appointed I was skeptical. While no idiot, the man is not a thinker and never was. Certainly he could bat, but batting is instinctive. It’s about vision, reaction, and movement.

Captaincy requires those traits in their figurative rather than literal forms. Ponting does not display any such characteristic. As long as he is winning, everything is fine. As soon as things turn, he retreats into schoolboy caricature.

Where someone like Waugh kept searching for a way to win, Ponting sulks, scowls, spits, kicks the ground, and fixes pained expressions on his face. To his inexperienced players, such negative body language looks like him conceding the match.

Bizarrely for such an attacking batsman, his only apparent tactic in these situations is to get increasingly defensive. Adversity shows him up as a man with only one idea, ‘Plan B’ apparently not a phrase the skipper is familiar with. Put simply, imagination is his kryptonite.

Consider the most recent Test in India. Your opposition are making good ground chasing a modest total. You need to take wickets, make them nervous, put doubt in their minds. Surely your only option is to put catchers in place and trust your bowlers to do their job.

No. Apparently your only option is to show no faith in your bowlers, spread your field, and claim the ultimate moral victory of ensuring your opponents win marginally more slowly than they might have otherwise.

Thus we had the sight of a side supposedly pushing for victory without a single slip in position. When Peter George got two edges straight after lunch, he could only watch them fly away for boundaries. And if choking runs was Ponting’s aim, the number scored through third man only sped up India’s victory.

The worst part was that it was hardly a new sight under Ponting, who has increasingly come to regard slips as a decadent bourgeois luxury. The number of chances whistling through an empty or undermanned cordon in recent years is uncountable, but learning something from this is apparently too much to ask.

Then there was the first Test of the same series, when Ponting’s fields during the match-winning Ishant-Laxman partnership surrendered the initiative as comprehensively as Mohammad Yousuf’s much-criticised fields for Hussey and Siddle in Sydney. Had it been Pakistan playing, Australian sports fans would have been yelling shenanigans.

Rewind to Nagpur in 2008. India had slumped to six wickets down with a modest second-innings lead, when they were suddenly confronted with the fearsome sight of Michael Hussey steaming in to bowl. Apparently Ponting was worried about slow over rates. Surely the best way to solve that problem would be knock over the tail and wrap up the innings?

But no. A grateful India took the initiative, racked up a lead of 382, and bowled Australia out. Again, an unwillingness to go for the throat had cost Ponting’s team a series. As Jeff Thomson remarked after the game, “I always thought he was an ordinary captain and this proves it. His captaincy calculator isn’t that brilliant, is it?”

The strangest part is that this timidity has been a feature of his captaincy since the 2005 Ashes, and nothing has been done to address it. Shane Warne very nearly dragged his ten team-mates team bodily over the line, but whenever the English batsmen were on top, Ponting’s defensive tendencies gave them latitude. History repeated itself in 2009.

Then there’s his man-management. Some players, like Marcus North, receive the Ponting tick of approval, and are then backed regardless of their failure to deliver. Others, who don’t enjoy the captain’s unaccountable confidence, are undermined on and off the field.

Warne, on the other hand, was plundering wickets, ending with a mammoth 40 for the series. Any captain worth his salt could identify an English weakness facing leg spin. Yet while the pacemen struggled, Stuart MacGill was an unused squad member.

The captain is no longer a selector, but if he had publicly or privately insisted on MacGill’s inclusion, he would have got it. Instead he stuck to the conservative unwillingness to play two spinners, regardless of other options.

Eventually the option was including new boy Shaun Tait for the final two Tests. With Australia pushing for victory in both, Ponting gave him just four overs in the second innings at Trent Bridge, and five in the second dig at The Oval. McGrath bowled 26. Ponting was afraid Tait would go for runs. Conservatism won the day again.

Quite aside from deflating Tait, it was a shameful waste of a bowling spot. If Ponting had such little confidence in the fast man, why on earth didn’t he ask for the spinner instead?

Coming back to that old adage of captaincy, what would your opponent least like you to do? Would the English have preferred to face another world-class leg spinner, or a pace-bowling debutant with no experience in English conditions?

Bryce McGain was backed as poorly as Tait. In McGain’s only Test, Ponting made him wait until the 56th over to bowl a proper spell – hardly instilling confidence in a debutant picked as a specialist bowler. Ashwell Prince was well set on 93.

McGain got collared, and it wasn’t long before Ponting was publicly naming Nathan Hauritz as his No. 1 spinner, never mind that he averages over ten runs more per wicket in first-class cricket. McGain had gone for runs, and Hauritz had a good economy rate. Defend, defend, defend.

Then it was Hauritz’s turn. After being resolutely backed in all media pronouncements, Ponting wouldn’t give him the ball at crucial moments in India. The economical bowler had become too costly.

When his fields for Hauritz were criticised, Ponting tried to shift the blame by saying the bowler had chosen them himself. This was beyond ludicrous. Even if a bowler asks for a field, the captain still signs off on it. The buck stops there.

And of course, there’s the lack of backing for the pace attack. By leaving out slips in favour of plugging midwicket, Ponting is effectively saying to his bowlers, “I don’t think you’re can get this guy out.”

This just reinforces the idea they’re young, raw, and potentially untrustworthy, rather than helping them believe that they’re now a Test-match attack.

This isn’t about trying to give a bloke a kicking. There is no doubt that captaincy has vastly improved Ponting the man. His younger incarnation was petty and unsportsmanlike (the tantrum at the umpire while bowling against West Indies in that 2000 series springs to mind.)

So it was truly pleasing at Bangalore to see Ponting, just moments after defeat had been sealed, with his arm around the main agent of that defeat, Sachin Tendulkar. Both wore broad smiles, and Ponting quite genuinely congratulated the only man to have scored more hundreds than him.

This was sportsmanship, the genuine article, a moment shared in the true spirit of the game. In that moment Ponting looked to be a cricket fan first, opponent second. The appearance sat very well upon him.

And again, losses are not the problem. It’s the manner of the losses. Australia have been losing meekly, not while going for a win. This unfamiliar approach sits less well on them. There is a frustration to seeing someone continue with a job to which they have proved unsuited.

It’s easy to say that Ponting should never have been appointed, but he deserved his chance. It has in fact come as quite a surprise that a man of such immense cricketing pedigree should show such little tactical aptitude. But then the selectors should have had the humility to recognise when the experiment had failed, and the gumption to do something about it.

Sacking Ponting now isn’t the answer. With the Ashes imminent, it will only create instability on which the English can capitalise. But the change should have been made far earlier, as far back as the last Ashes. 2005 could have been written off as Ponting learning the ropes. 2009 was a lesson that nothing had been learned. And by this late stage of the game, nothing more is likely to be from here on in.