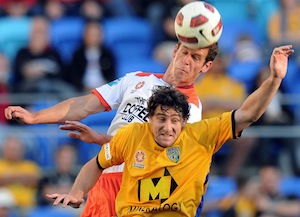 The Brisbane Roar and their manager Ange Postecoglou have received plenty of plaudits for the quality of the football they’ve dished up this season, and deservedly so.

But there was something even more impressive about their work at Suncorp over the past week or so, and especially on Saturday night, when they managed to see off the Melbourne Victory with a late winner from Costa Rican Jean Carlos Solorzano.

What the Roar were able to demonstrate across three games in eight days is that they not only have the stamina and quality to see out the season, but that they are developing their patience and mental toughness to go with it.

After such high octane performances against the Newcastle Jets and Central Coast Mariners, in which Postecoglou’s men procured four points, but should have had six, and with the Victory coming home strongly in the second period, it was tempting to think the Roar might have run out of legs and will, despite dominating the first period.

Thomas Broich, such an influence for two and half games, suddenly stopped getting his foot on the ball, while the ‘Mass and Matt Show’, Murdocca and McKay, the masters of pass and burst forward, were reduced to mere mortals, focussed on keeping their shape.

Soon the Victory had their equaliser, from a former Roar player no less, and were getting on top, through possession and territory. For a while it looked like the curse of the three games in a week would strike Postecoglou.

Brisbane sides of the past would most certainly have folded, frustrated by their own inability to finish off a game.

But the sign of a good side is not only an ability to dominate when the possession is flowing, but to absorb and respond when questions are being asked. Respond the Roar most certainly did.

The fact Postecoglou was able to call on three attackers from the bench certainly helped. The timing of his double substitution, introducing Solorzano and Kosta Barbarouses for Reinaldo and Mitch Nichols, was perfect.

While Reinaldo had toiled manfully, working the frontline well with his and mobility, Kevin Muscat seemingly had his measure. But the introduction of Solorzano and Barbarouses on 64 minutes upped the ante, their pace posing even more questions of the Victory rearguard.

What a luxury for Postecoglou, even moreso when you consider he had the equally explosive, and impressive, Rocky Visconte up his sleeve.

With McKay and Murdocca reduced to walking pace (by their standards), it was time for Luke DeVere to inject himself into midfield with an aggressive forward run, one we have seen throughout the season.

There is something rather raw about the way the Roar central defender carries the ball forward, at pace and with power, but he has his head up and he is certainly leaving the opposition behind, even if he doesn’t quite know what to do when he gets near or inside the box.

Here he burnt the retreating Ricardinho before venturing through an empty midfield and gliding past a stationary Muscat. A bit of fortune presented the ball to Solorzano, who finished with aplomb, but Postecoglou will be delighted with players like DeVere taking the initiative in situations like this.

It is one of the many facets that go into a successful side, and after being culpable at AAMI Park in the first clash between these two sides this season, it was wonderful to see DeVere bounce back here.

He and Matt Smith have been excellent throughout, playing open, covering the ground with pace, and always looking to play out.

The other unsung hero is Erik Paartalu, who, like DeVere and Smith, provides a real physical presence, in the midfield and at set pieces, but also likes to play.

There is something balanced, methodical but beautiful about the way the Roar construct their attacks. They have a few rules and continue to adhere to them;

1. The two fullbacks get forward, allowing the centre backs to split. This allows McKay to drift out into the left back spot or Paartalu to drop into the space vacated by the split central defence. McKay and Paartalu take turns in getting on the ball and starting the play.

2. There are very few, if any, long balls. It’s all on the ground, and the focus is about finding a play-out solution. The players are given license and encouraged to play. Postecoglou isn’t interested in “playing safe”.

3. Once a pass is made, usually forward and diagonal, the passer normally takes off, bursting forward into space, ready to receive. With the fullbacks also getting forward, and the front three dropping off to receive, lay-off and move forward, there are many bodies in motion. It’s movement, but it’s in synch, unlike some of the days gone by, when the Roar appeared to run for the sake of running.

4. An economy of touches, normally one or two, ensures the ball moves quickly, giving the opposition little opportunity to get organised.

5. Their recovery of the ball, soon after losing it, high up the pitch, ensures the pressure is always on the opposition to retain the ball on the few occasions they see it. The Roar swarm, with the buzzability of McKay and Murdocca setting the tone.

Hitherto the real problem has been an inability to get what they deserve, mainly due to their wastefulness at the pointy end, but there have been some great signs of development over the past week or so.

If the Roar can continue to add patience and mental strength, and find solutions when their sophisticated possession-based plan A doesn’t find the goals, then Postecoglou’s men will sure take some beating between here and the finals.