Is the optimism in English rugby justified? 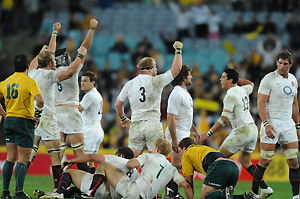 In my Rugbytopia every city would have a Lang Park or Millennium Stadium. A hybrid of the two would be perfect; the throats of 60 odd thousand Welshmen singing to the shrine of King Wally Lewis as it triumphs over the unmarked graves of Brisbane’s pre-war dead.

When the roof is closed at Cardiff the humidity driven from the brows of a well lubricated crowd and the smoke from the pre-game fireworks creates a cloudlike haze through which light beams down like rods of redemption on a lust-touched priest.

You are in the cathedral of the Welsh Jesus who wore a number ten on his back.

On match days, all of Wales seems to descend on Cardiff, ticket holding or not, and so the pubs surrounding the stadium stay well filled even during the game.

Likewise on Brisbane’s Caxton street the pubs do a tidy trade either side of a game though probably never better than before that wonderful 2003 world cup game between England and Wales when the street was neatly divided into two white and red pub choirs.

You can’t beat the home nations for beer in hand, song in throat patriotism.

What a home and away series that would be.

In both stadiums the game is played on your lap, so close and intimate with the action, yet in both stadiums there is a tremendous feeling of being part of something more than just a crowd. The viewing experience between spectators is easily shared, adding so much more to the enjoyment of the game.

The Twickenham experience is a wonderful occasion, too.

Playing three-coin spoof with strangers on a crowded outbound from Paddington, buying a pocketful of boerewors from a front garden braai on the way to the ground and then lingering after full time in the rib cage of the concrete cauldron singing along to karaoke Delilah.

But the problem with Twickenham is in the long commute there and the even longer wait for a train home afterwards. For the international season this isn’t so bad if you are well armed with a skinfull of your favourite but the lack of a rugby ground in the heart of London does hurt the domestic game.

Harlequins play at the Stoop, a short saunter away from Twickers. London Irish who are famously neither located in London nor populated by Irish are a good thirty quid trip train ride away in Reading. Wasps are also out in the western badlands, further from the capital’s attractions than even the most skint of working holiday antipodean flat-sharers care to end their Kontiki tours.

Saracens have thus managed something of a coup by returning to North London and taking up residence a mere half hour tube ride out of Kings Cross in Barnet Copthall Stadium.

I wonder what that will be renamed to?

Whilst falling well short of delivering London its Lang Park/Millennium Stadium hybrid it does at least go some way to bringing rugby inside London. Perhaps the move south is simply symbolic of the club’s slow decent into South African hands.

More likely it is symbolic of English rugby’s growth and improvement both on and off the field. The RFU worked hard to establish itself financially and the Premiership and European competitions are ever improving and ever more popular.

Are there good times ahead for English rugby?

The new CEO of the RFU, John Steele, has announced a change in direction for the governing body. Out is the money-making focus of his predecessor, Francis Baron, and in is a desire to see their hard earned prosperity and weight of playing numbers turned into results.

English rugby fans often remind me of Nick Cave albums: things turn from most wonderful to most terrible and back again every couple of minutes. However, there does seem to be a sustained optimism in English rugby at the moment.

Is it well founded?