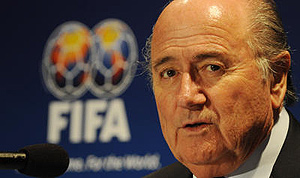 Going against its own technical committee’s report that said Qatar was not a suitable place to host a World Cup, FIFA exposed its seedy underbelly to the world by awarding the tournament to the tiny Middle Eastern nation.

Qatar is a nation of just 1.6 million people, spanning just 11,437 km2 (ranked the 163rd largest country in the world – behind the Falkland Islands), with only one major city (Doha), one airport, a questionable human rights record, and incredibly strict laws relating to alcohol consumption.

To think it is suitable place to host the largest sporting event in the world, over the United States of America, Japan, South Korea and Australia, is laughable. And it made their rise to favouritism and subsequent victory in the 2022 World Cup bidding race almost farcical as we watched it unfold.

FIFA’s independent technical team, which inspected all bidding countries, reported serious flaws in the Qatari bid; namely the heat of June/July and the size of the country and close proximity of stadiums – 10 of its 12 stadiums are within a 25-kilometre area.

“The fact that ten out of the 12 stadiums are located within a 25-30 kilometre radius could represent an operational and logistical challenge,” said FIFA’s report.

“The fact that the competition is planned in June/July, the two hottest months of the year in this region, has to be considered as a potential health risk for players, officials, the FIFA family and spectators, and requires precautions to be taken,” it continued.

Qatar will need to spend an enormous amount on its promised air-conditioned stadiums and the like, while making some concessions on its strict alcohol laws.

It’s said construction of the stadiums will cost around $3 billion, but that figure will skyrocket when the reality of how it is to overcome its shortcomings hits home.

So considering these deficiencies, we are left with the obvious question of why Qatar.

Well, their political muscle lead, undoubtedly, by Asian Football Confederation President Mohamed Bin Hammam obviously was a decisive factor, and the rest of the committee was cajoled into voting for them given they scored 11 votes in the first round (nearest rival Korea Republic had four, Australia just one) of 2022 voting.

We can never know the wheeling and dealings that went on behind closed doors, but it obviously went against any logical decision on the suitability of hosting a World Cup.

Their presentation in Zurich was strong (one of the strongest) and showed there is more to their bid than dollars.

Like Australia and Russia, the Middle East is uncharted water for the World Cup, so President Sepp Blatter had some justification to play up that message (although none of us really believed him). And hopefully the decision brings about a closer and more open relationship between the Middle East/Islamic world and the rest of the world.

But in going against their technical committee’s report and showing once and for all that the political games and deals is what counts in such decisions, FIFA have done serious damage to its own reputation.

There can be no other reason why Qatar won the bid aside from this geopolitical game, making future bids irrelevant. No matter their suitability and strength, if you don’t have the political backing you have no shot, seems to be the message. Just look at England’s 2018 bid – strong technical report, strong football heritage and the strongest presentation in Zurich, yet they walk away with two votes and a first round exit.

FIFA exposed its seedy underbelly, once reserved for the backrooms, to a global audience – and the damage of that decision and the subsequent fallout will have huge consequences for the governing body and the game. One wonders if the financial windfall from a Qatari World Cup is worth that damage.

Thankfully the 2018 and 2022 farcical bidding process is over – although the recriminations will continue unabated.

How fitting that on the day two World Cups were announced at once, one of the countries allegedly found to have colluded with a bidder in the other race should win (Qatar), while the other missed out by six votes (Spain-Portugal, defeated by Russia in the final round of voting for 2018).

It was certainly a dark day for the game.