Now is the time to support the Aussies 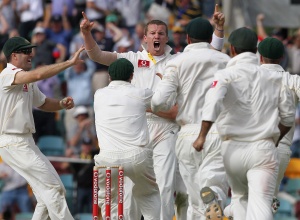 It is easy to support your team when things are going swimmingly. The Australian cricketing public have had it great for well over a decade.

The Aussie cricket team had a record that would make most other sport supporters envious and produced a list of champions that takes longer to scour than a wikileaks dump.

During this period it was no surprise how well supported the team was. People always hop on a runaway bandwagon. Those that had ridden through the bumpy road that was Border’s early captaincy I’m sure were eager to share the wagon-space with those who started to enjoy the game more through the winning times of Taylor.

Later came Waugh’s period of almost foregone conclusion. That was a great period and the wagon was absolutely jammed packed. In fact the only mutterings from the back in those years were about the team winning too much. Be careful what you wish for.

It is harder to rally behind a team when they really need it. When it is hard to see where the next win will come from. When your favourite players have disappointed you with their recent performances.

When the team seems to lack direction, determination and even desire. I say ‘seems’ because surely their talent and professionalism haven’t just vanished. Being systematically outplayed by a very skilful team can make you look thoroughly ordinary, perhaps even inept.

Here is the irony; this is precisely when your team needs you to get behind them but no one likes to pay to watch their mob lose. Fair enough, too.

What isn’t fair enough is the bile being heaped on the players by their former fair-weather friends. Everyone is entitled to their opinions how the team should be selected, be lead and perform and believe me I’ve got a lot (most of which involve the removal of something rhyming with Schmilditch).

But whoever pulls on the baggy green going into the WACA test should know that they have everyone in the Aussie cricket fraternity behind them. Once that Test starts, they should know absolutely no-one is death-riding them.

Who does that help?

Winning against a team that has so far proved better than you across the board and has the momentum is much more impressive and rewarding than flogging inferior teams 3-0 series after series.

This could be a very exciting time for Aussie fans if they are willing to put themselves out there to suffer a few disappointments along the way.

Plenty of room on the bandwagon left if you want to hop on.