Rugby and the Religion of the Playing Fields 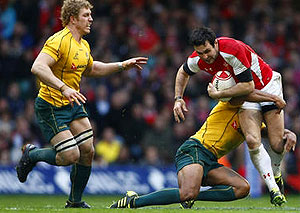 Where passion and skill intersect, rugby finds its heaven on earth. And if there were a chosen rugby people, surely it would be the Welsh. But passion alone does not guarantee them the throne.

The most magnificent rugby temple in the world is the aptly named Millennium Stadium in Cardiff. With over a million visitors every year, this is the showpiece for Welsh aspirations.

It has the temple and it has the devotees but it is still waiting for the Messiah. The golden ages of the early 1900’s and the 1970’s still sustain a nation that has beaten the best but never won the ultimate crown.

Wales came third in the inaugural World Cup in 1987. They still produce world class players, but not a world class team.

The coal mines of Wales gave rise to Seven Sisters RFC and they play in the WRU Division 3 South West league. The club is member of the Welsh Rugby Union and is a feeder club for the Ospreys. Founded in 1897, the club is in the middle of what was once the richest source of coal in Britain, if not the world.

In the 1950s and 1960s, when touring teams came to play Seven Sisters they would often be given a tour of the colliery prior to playing a match.

It was common practice that when they were lowered down the shaft, the winding man would deliberately allow the cage to drop like a shot bird before applying the brake at the last moment. Suffice to say the touring team rarely won.

Newport, Cardiff, Llanelli and Swansea are four of the better known clubs and a rugby education is not complete till one has played there.

These teams have pulled from the depths of the earth what we find so elusive in the air we breathe.

Where else does this mysterious spirit reside? Can we see shards of it in the tales of the Maori fishermen who went to sea in boats carved by hand and steered by the soul? The magic of the feint and the bravery of the maul, blessed by the spirit embodied in The Legend of Maui and the magic fishhook.

All Black rugby is more than a religion. It is the spirit that unites a whole country and any setback is a cause for national mourning.

The pre-eminent team and the most iconic sports brand is the All Blacks. This team has evolved into both myth and self-fulfilling prophecy. Rugby excellence is defined by the All Blacks.

All those that aspire to this have to genuflect in the shadow of the Kings of Rugby. The All Blacks play rugby with a religious fervour that is greater than anything a Baptist revival congregation can produce.

It is an embrace of the very essence of life. The vitality and lifeblood of its mountains and rivers. The stoic and weather-beaten suffering of a windswept nation that is erroneously called the Shaky Isles.

Phil Kearns once said: “You can go to the end of time, the last World Cup in the history of mankind, and the All-Blacks will be favourites for it.”

Rugby truth lies somewhere between the muddied oafs and Hemmingway’s A Farewell To Arms. It is 15 men coming together, forgetting the futility of our greater pastimes like war and poverty and inequality. United in the spirit of the oval ball. Dedicated to the quest of running free.

The swoop of the cormorant, the mesmeric jump of the dolphin and the immovable certainty of a clockwork scrum.

Where did it start? We know it ends at Murrayfield and Lansdowne Road. We have seen the light at Twickenham and Carisbrook. The wondrously named Eden Park and the sheer grandeur of the Stade de France.

I believe, like in cricket, it starts before we are born.

It is embedded in the DNA of the world. It ebbs and flows like the seas that girt our lands. It changes like our seasons but also remains the same.

It may lie unawakened till we are seven or seventeen. It only requires a magic whiff and the seduction is complete and permanent. And one is awakened to a world of myriad possibilities. Rugby can enrapture but it can also be tragic. The dropped high ball and the stampeding cavalry rucking the hapless custodian.

It must tug at the heart of the most cauliflowered prop.

I have left Australian Rugby for last because it is one I am most familiar with. The runaway train that was Mark Loane. Captained against the AB’s in 1979 and the victory at the SCG (12-6) won back the Bledisloe after a gap of 30 years.

There was no sand-bagging to a Loane Tsunami. It was remorseless and usually resulted in a try.

The 1980’s and 1990’s saw Mark Ella spread his stardust over an exciting backline. There was no shortage of hard heads either. Standouts for me were Simon Poideven, Dan Crowley, Nick Farr Jones, Larkham (the ghost who walks) and the pairing of Little and Horan.

Beyond the nurseries of the private schools in Brisbane and Sydney is a great untapped reservoir of Rugby talent. What riches are hidden in the communities on the other side of the Nullabor? How many Ella’s and Beale’s can we find in our native rainforests?

The land beyond our cities can appear stark and inhospitable but it is home to a people steeped in a civilisation as old as the world and bursting with running in their blood.

Perhaps our rugby future has always been tied with the natural elements. The air, the earth and the sea. Everything ultimately comes back to these.