Ambidextrous Usman will walk in Ricky's shoes at the SCG 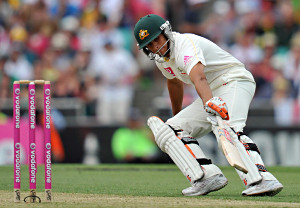 Australian cricketer Usman Khawaja poses for a photograph at the SCG in Sydney on Thursday, Dec. 30, 2010. Khawaja has been selected in the squad and Michael Clarke as captain for the Fifth Ashes test against England starting at the SCG on January 3rd. (AAP Image/Paul Miller)

Usman Khawaja is a high flyer, a qualified pilot and will be a Test cricketer on Monday. Ambitious and ambidextrous (left-hand batsman, right-arm medium-paced bowler), Usman Khawaja, 24 in December, was born in Pakistan and moved to Sydney when three.
Facebook Twitter Whatsapp Reddit Email
Share

He attended many “auditions and rehearsals” before getting a major role in a drama titled “The Ashes”. He was in the Australian squad for England in mid-2010 and then was a standby for injured Michael Clarke and Ricky Ponting in the recent two Ashes Tests.

Now he gets his big chance, to fill Ricky Ponting’s gigantic shoes at no. 3 in his home ground, Sydney. How does he feel, filling in for the champion?

He told Peter English in CricInfo, “Ricky is a legend of a cricketer, a legend of a bloke… He’s the kind of guy that if he told me to jump off a bridge I probably would, I’d follow him anywhere. I’m not here to fill Ricky Ponting’s shoes, I’m going to go out there and try and do the best I can. To replace 12,000 runs is a big feat and I still haven’t scored any.”

I had the good fortune of interviewing Khawaja twice, in 2006 when he was 19, playing in a multinational 6-a-side 5-overs cricket festival in Bankstown, Sydney and then in 2009 for a national cricket magazine. Here is an edited and abridged summary of our Q & A:

His favourite ground is Coogee Oval where he played first-grade for Randwick-Petersham (R-P). It beats SCG in scenic views every time!

Favourite moments — apart from being picked for Australia? “Perhaps my first first-class match for NSW against Victoria in February 2008 at the SCG when I scored 85 run out. Representing Australia in the Under-19 World Cup is another memory I cherish. Also scoring 120 for R-P against North Sydney when I was in my teens and being adjudged Player of the Championship in the Interstate Under-19 competition in 2005.”

Best memory outside cricket? “Gee, that’s a hard one. Umm, finishing my degree in flying; I felt so relieved!”

Your best innings? “My 172 not out for NSW against Western Australia in a Shield match [in 2008-09]. I hit 22 fours and two sixes which was very satisfying. Also scoring two consecutive double centuries for NSW 2nd XI in 2008; 210 not out against South Australia 2nd XI and 228 against Victoria 2nd XI.”

Best bowling spell? “When 15, I took four wickets for one run for R-P against Sutherland in a Green Shield Under-16 match.”

Batsman you respect most? “Simon Katich. He is so good. Everyone respects him. I love his batting and his temperament. ”

Your hero? “Adam Gilchrist. As a boy I used to follow him wherever he played in Sydney. My childhood hero is boxing legend Mohammad Ali.”

Usman Khawaja arrived on the big scene last season when he hit three centuries for NSW in Sheffield Shield. Following his 554 runs (with two centuries) in 2008-09 in Shield matches, he exceeded all expectations when amassing 698 runs hitting three hundreds in 2009-10.

NSW was on its knees at 4 for 88 against Queensland in Brisbane when he registered his maiden first-class century in 2008-09. He followed this with an unbeaten 172 in the next match against Western Australia.

Such single-minded dedication deserves success and he is on his way up.

Simon Katich is full of praise for ‘Usie’ Usman.

His stylish batting and big scores this season are behind his much awaited Test call.

Having known Usman Khawaja since 2006 when he was barely 19, I will feel extremely nervous as he faces his first ball in Test cricket.