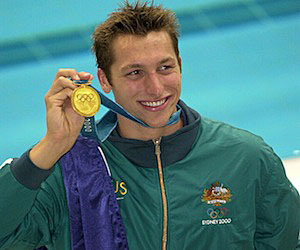 A Sept. 16, 2000 photo of Australian swimming champion Ian Thorpe as he celebrates winning gold in the 400m freestyle on the first day of competition at the 2000 Sydney Olympics. (AAP Photos/Julian Smith, File).

Ian Thorpe has ended months of speculation by announcing his return to swimming today, just in time for the 2012 London Olympics. It’s a much-needed boost for Australian swimming, which has been on a steady decline since Thorpe’s retirement four years ago.

The men’s team won only two individual gold medals at the 2010 Commonwealth Games in Delhi, dwarfed by the 12 the women’s team claimed. Of the 22 medals the swimming team won in Delhi, the women’s team won 16. The Aussie men failed to win any gold at the 2008 Beijing Olympics – a far cry from the success enjoyed between 1996 and 2004. With the Americans pulling away at the top of the sport, Europe a constant threat and the ever-improving Asian challenge, Australia isn’t the force it used to be in one of its most popular and culturally important sports.

Moreover, Australian swimming needs another hero. Geoff Huegill provided the feel-good story of Australian sport in 2010, shedding 40 kilograms in his return to the pool after a two-year absence to win Commonwealth Games gold in the men’s 100m fly, but at 31 years of age (33 by the time of the London Olympics) it remains to be seen how long he can extend his comeback. Meanwhile, the Stephanie Rice-Eamon Sullivan generation have failed to capture Australian hearts. Australian swimming’s current generation, bar Huegill, lacks the presence of Thorpe. Beyond Huegill and Sullivan, whose celebrity out of the pool has inflated his perception, you’d be hard pressed to find a current Aussie male swimmer that can be classified as a household name.

Whether Thorpe’s return can in any way improve the fortunes of the men’s team remains to be seen, but coupled with Libby Trickett’s recently announced comeback, it gives Australian swimming a significant shot in the arm at a time when it desperately needs its heroes and the injection of corporate and public support heading into an Olympic year.

At 28 years of age, Thorpe is young enough to successfully comeback. He’ll still be in his twenties come London 2012 – a significant advantage he has over the likes of Lance Armstrong, Mark Spitz and Michael Schumacher, who made their comebacks in their late thirties/early forties and failed. (Note: Schumacher’s comeback is still going, but his first season back delivered little in the way of results.)

But is he hungry enough? Thorpe walked away from the sport to pursue a life beyond the pool, lacking the motivation to continue. But no one can blame him for his early retirement. Swimming demands an early start in life (Thorpe first represented Australia at 14), with its relentless 5am starts and the loneliness of swimming lap after lap with just the company of your own thoughts. It’s little wonder the likes of Thorpe, Trickett and Huegill have fallen out of love with the sport and yearned for a break.

Others claim Thorpe’s comeback is motivated by financial reasons, having fallen on tough times in his business dealings. Even though Thorpe denied it in his press conference, the fact his comeback was announced via a Virgin Blue-backed presser, complete with hostesses handing out the mics, showed that he has some serious corporate backing behind him. Only he knows the truth. But, given Huegill’s led, you sense Thorpe’s competitive juices are flowing.

Interestingly, Thorpe says he will focus his attention on the shorter distance formats, namely the individual 100m freestyle and 4 x 100m and 4 x 200m relays. It’s interesting because by moving away his 200m and 400m freestyle pet events, Thorpe avoids a direct clash with Michael Phelps, the American who dominated the Beijing Games with eight golds and has bettered the 200m freestyle world record that Thorpe once owned.

Hopefully Thorpe is tempted back to his pet events, for a head-to-head clash with Phelps would add an extra dimension to his comeback and set the stage for the most eagerly anticipated contest of the London Games.

He still has age on his side, and even though his infamous full body suit won’t be making a comeback – the suits having been outlawed by governing body FINA – he still possesses those size 17 feet that produced the most powerful kick seen in swimming. The rest will come down to his determination.

Will Thorpe’s comeback be a success or failure? A year after Huegill’s successful return, Australian men’s swimming suddenly has another, if not bigger, story to interest us.