Cameron White uncertain about whether to audition or play

With only a couple of weeks until Australia depart for the sub continent most of the World Cup squad of those not in the infirmary managed to find form in the recent series against England. Most that is save for the Victorian and most recent Australian captain Cameron White.

White’s form this summer in Australian colours has followed the path of the other two combatants to lead their country onto the field. If the Australian captaincy is the poisoned chalice that it appears then lets hope that the selectors don’t compound their list of errors by anointing Shane Watson to a leadership role.

Returning to White, the best way to describe his batting is uncertain. He appears uncertain of his role in the side, is he there to hold the innings together or is he there to bludgeon the attack? Whilst his position in the side is safe – and rightly so – he has not been able to show the kind of form that secured his place in the team in the first place.

White cemented his position in the side at the end of the last Ashes tour to England where he batted at number three, made his first ODI century and regularly passed 50 when Ricky Ponting was rested from the side.

The responsibility suited him, much as it has since being handed the captaincy of Victoria seven years ago. Why hasn’t he batted at three this time?

This series, with Ponting out of the side, White continued to bat at four and sometimes lower down the order to accommodate Michael Clarke who was also looking for touch. Whilst there is seemingly little difference between first and second drop, it’s his approach that has been concerning.

White looks like a man who is auditioning for a spot in the test side whilst trying to maintain his role of lustrous strokes and power hitting in the shorter versions of the game. Regularly he has had the opportunity to build an innings only to realise his strike rate and the team’s run rate has stalled to the point of needing quick boundaries. The ensuing stroke play has then brought about his demise.

This again highlights the poor communication channel the selectors have with players. White should be considered a Test candidate when the longer formats resume later in the year and he should be informed of this from the selection panel. In the meantime he should be told to play his natural game in the limited overs format because Australia needs him to do perform this role and this is what he is in the side for.

I am sure there are naysayers and doubters about White at Test level and that is probably a debate for August when the next squad is picked. But given how important a player of White’s ability will be on the sub continent in a few weeks time, let’s hope he can forget about the audition, concentrate on the now and help Australia to the final stages of this pending 6 week marathon tournament.

Finally a decade after its inception the Allan Border Medal night has lost much of its appeal. So much so that even Channel Nine do not telecast live it anymore.

The major problem being that the potential winner can come only from a group of approximately 15 players and realistically only three to four players in any given year are candidates. The easiest prediction of the year was that Shane Watson was a certainty to win back to back awards last night.

Last week, I wrote some thoughts on Australian bowlers I could spend hours watching bowl. 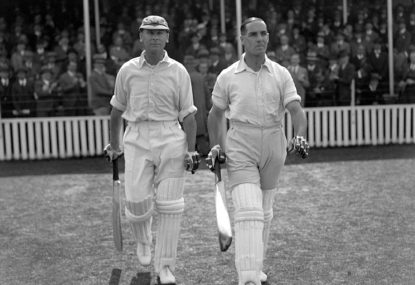