NRL 2011 another year for drought-breakers?

The Storm salary cap saga aside, the 2010 NRL season will largely be remembered as the year the Dragons finally shook off their “choker” tag and broke a 31-year premiership drought. For the joint venture St George-Illawarra side it was, in fact, their maiden NRL premiership since entering the competition in 1999.

2011 could be the year in which another side finally breaks its drought and wins a long-overdue NRL premiership. Three drought-stricken NRL sides can lay realistic claim to being the potential 2011 premier in-waiting, with the New Zealand Warriors perhaps laying the strongest claim to assuming podium honours come October 2nd.

Let’s face it, for the last couple of years, the Raiders, despite having few representative players in their ranks, have played a brand of football that most of us would love to see our own club embrace.

Their form at home has been especially eye-catching and become must-see weekend viewing.

With the bulk of that side intact and a number of big-name recruits in areas in which the Raiders had previously been lacking, 2011 looks promising for this rising Raiders outfit.

The loss of Terry Campese for a large part of the season is doubtless a massive blow to both their attacking capacity and leadership, but this blow has been softened considerably by the acquisition of the games most under-rated half in Matty Orford.

Orford is equally adept as an attacking foot-balling and has perhaps a stronger all-round game. He has also “been there, done that” in the premiership-winning sense and that sort of experience will be vital for a young side destined to play in some big games in 2011.

The Raiders have lost a few other important campaigners, such as dogged outside back Joel Monaghan, workhorses Scott Logan and Troy Thompson and the versatile Adam Mogg, but on the positive side each of these players have been traded in for younger models.

Blake Ferguson is an outside back with limitless potential and his acrobatic efforts last year highlighted him as a player with the X-Factor of a Folau or an Inglis. Playing outside a stronger centre in Jared Croker could see his full potential realised.

The acquisitions of former test prop Brett White and young prop Nathan Massey should supplement the losses of Logan and Thompson and form an imposing legion of front-rowers alongside man mountains David Shillington and Tom “Learoyd-Large”.

The rise and rise of Josh Dugan should see him cement himself as the first-choice fullback for the NSW Blues in this year’s State of Origin and he will be a huge factor in the Raiders chances in 2011.

Young centre Jared Croker is also set to push for representative honours in 2011, but will have to bounce back from the psychological blow of missing the shot at goal that would have got the Raiders home against the Tigers in last year’s finals series.

We all know they are deadly at home but they can be abysmal away from Canberra Stadium. For the Raiders to realise their considerable potential in 2011, they will need to master the art of winning outside of Canberra.

A $5 million sponsorship deal with the South Sydney Rabbitohs and the acquisition of Greg Inglis has the streets of Redfern buzzing and there are plenty of other reasons why Souths fans might have something to crow about in 2011.

Big bad Sam Burgess was Souths best and most consistent performer last year and Souths will be looking to the big Englishman to again lead from the front.

With younger brother George joining him in the rabbit warren in 2011, Souths may have their very own answer to the “bash brothers”. George will doubtless begin the year in the under 20 side but with his (already considerable) size and reputation at just 18 years of age, we could well see him joining his brother in the first-grade side before long.

The rebirth of Ben Ross should provide additional depth in the front-row stocks, however it is the captain Roy Asostasi on whom much of Souths fortunes will rest in 2011.

After a disappointing last couple of seasons, plagued by injuries and poor form, Asotasi will be looking to lead from the front and reclaim the powerhouse form that saw him regarded as the world’s best prop just a few years ago. His leadership will be key to their chances of pushing for this year’s title.

Another key for Souths will be consistency – particularly upfront and from their halves pairing of Sandow and Sutton. Despite being two of the most talented ball-players in the game, both have been plagued by inconsistency and unless they can improve on their “rocks or diamonds” output, it could be another unfulfilling year for Souths fans.

With extra defensive work done during the off-season, it is hoped that Sandow – once dubbed “the human turnstile”, will provide the all-round game that a premiership-quality side requires from its pivot. The ability of Sandow and Souths other key players to make substantial improvements in 2011 will go a long way to determining Souths fortunes and to justifying the sacrifices made to attract Greg Inglis to the club. Expect big things.

The New Zealand Warriors were the hard-luck story of the 2010 NRL finals series. Despite finishing 5th on the table and entering the finals series in very good form, their season was terminated prematurely thanks to some Mat Rogers brilliance and a dubious finals system that rewards one-off efforts more than the concerted efforts of a team over an entire season.

The Warriors late-season form of 2010, plus there astute off-season signings, coupled with the emergence of a number of its premiership-winning under-20s side see them as a real contender in 2011.

In recent seasons the Warriors have prospered despite a long injury list and if they can manage to get through the regular season with most of their bodies still on the paddock there is no reason they can’t break their duck and finally lift the prized NRL trophy.

High-profile recruits Feleti Mateo and Shaun Berrigan should provide the Warriors with more direction in attack – their biggest weakness in recent years.

The Warriors second phase play and try-scoring from kicks has been a strength during that time, but a distinct lack of direction and structure with ball in hand, particularly whilst inside the opposition half, has plagued them – with countless opportunities squandered through a pushed pass or poorly chosen option.

Mateo, with his unpredictability with ball in hand and ability to create gaps for those around him is a definite drawcard in this area and Shaun Berrigan’s class and experience from hooker should see the level of organisation and option-taking improve considerably. The Warriors still finished 5th on the table last year, despite their obvious inefficiencies in attack and the possibilities are endless if this aspect of their play can be rectified in 2011.

The Warriors have several young guns pushing for a place in the starting 17 in 2011. Under-20s tyros Ben Henry and Elijah Taylor showed strong indications in last week’s trial game against the Knights that they are ready to step up and play with the big boys.

Likewise, electric winger Glen “Fish” Fishiahi looks ready to scale new heights and establish himself as the right-side winger to compliment “The Beast” Manu Vatuvei. There is real depth in the outside backs for the Warriors and competition for wing spots will be intense with Kevin Locke, Bill Tupou, Krisnan Inu and Fishiahi seemingly vying for the one spot, but it could well be the unknown from the Under 20s that establishes himself as one of the stars of the future on the wing for the Warriors in 2011.

The Warriors strongest side will consist of a halves pairing of James Maloney and Brett Seymour, with Mateo to interchange in a playmaking role from lock/second row, in the same way the Roosters used Braith Anasta last season. Maloney was one of the finds of the year last year and should be even better with a year of top-grade under his belt.

Although missing much of the season through injury, Seymour slotted in seemlessly when he returned and an injury and controversy-free season could see him prove to the doubters that he is indeed a class act. Between the two the Warriors have a powerful kicking game which should ensure they play most of the game down the right end of the field.

Five key determinants of success in 2011: Feleti Mateo, Shaun Berrigan, James Maloney, ability to attack inside opposition 20, and “The Beast”.

'Why wasn't that a penalty?' Penrith try marred by obstruction debate

Penrith's Izack Tago made contact with Lachlan Ilias on the outside shoulder during the lead-up to a Dylan Edwards try. Fans were torn on… 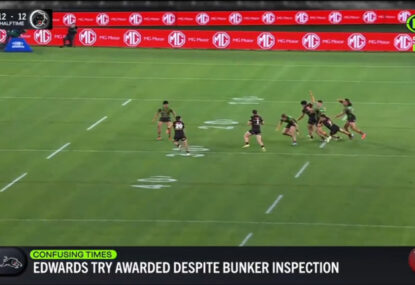 'Why wasn't that a penalty?' Penrith try marred by obstruction debate

What a win for Souths! Liam Martin went toe-to-toe with Jaxson Paulo to find out who could botch the most tries. However, the Penrith… 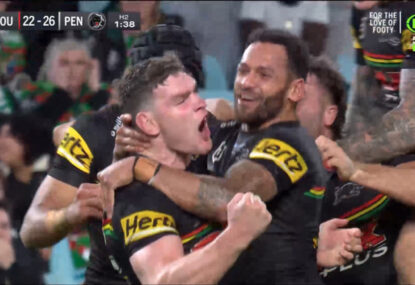 Penrith have secured the Minor Premiership after a stirring late comeback to defeat South Sydney 26-22 thanks to a late Liam Martin try. 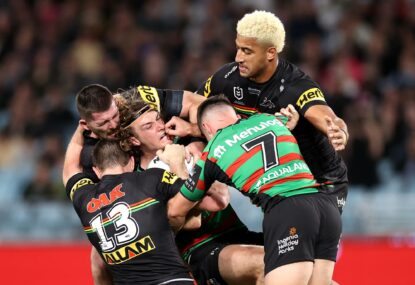 Who can really blame a prop for chasing a try when the ball is that close?! Tevita Tatola has found the tryline four times… 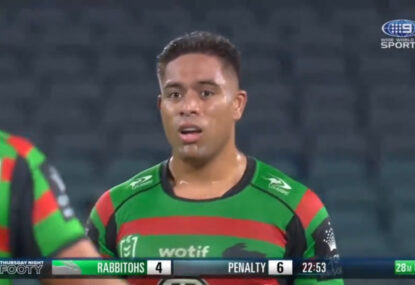 It was a CROOK pass alright! Stephen Crichton just keeps lingering in the nightmares of Rabbitohs fans. The Panther strode away to score in… 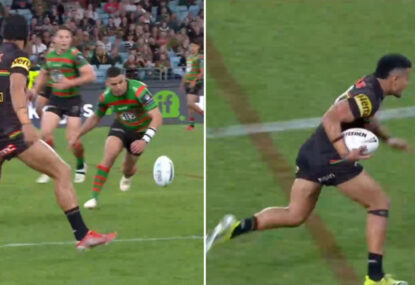 Here are the burning questions for all 16 teams for Round 23.