The contenders for the World Cup that counts 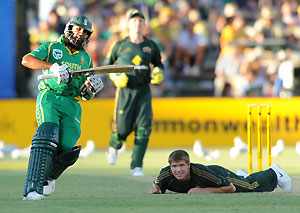 This is compulsory reading for the wise men at Cricket Australia: The 2015 World Cup, to be played in Australia, will be the 50 overs format and not a hybrid 45 split over impersonator.

The opening ceremony in Bangladesh confirmed the enthusiasm and the passion of the subcontinent for the 50 overs format. Irrespective of the research conducted by CA, it is not the 50 overs format that is on the nose but the meaningless and endless seven-match series’.

Also, lop-sided contests between Australia and the likes of the West Indies or Zimbabwe. Lively pitches where 260 plays 250 are more riveting than 434 playing 432.

Having got the homily out of the way, it would be prudent to look at the combatants vying for the trophy in 2011.

Let us start by dismissing those that are pretenders. Shahid Afridi’s Pakistan will be the first to be eliminated before the semi-finals. A captain who could get a lead role in Swan Lake because of his pirouetting abilities. He has also been known to get hungry between deliveries. Pakistan is, at the best of times, a team divided.

In 1992 they had Imran Khan and a young trio of Wasim, Waqar and Inzamam. The current squad has no less than three ex-captains. And which of the players are in purdah?

Shoaib Akhtar, the Rawalpindi Express, is more like Thomas the Tank Engine. He is incapable of derailing the best batsmen. Pakistan has flair but this is offset by the froth. Unlikely to threaten at the business end but remain the most watchable of the teams.

New Zealand have been waiting for Brendan McCallum and Ross Taylor to deliver, but it is like waiting for Godot. Daniel Vettori will have to take five wickets in every game and score a century for New Zealand to progress beyond the quarters. Southee can be flaky and Jacob Oram is a torn hamstring waiting to happen. Scott Styris will flatter only to deceive. Sad, but the Shaky Isles will live up to their name.

The West Indies is a team in a state of perpetual decline. Like Pakistan they have an administration that is racked by regional jealousies and players that are looking out for themselves. Disparate earnings and inflated egos will hold them back. Where once they were mercurial they are now just morbid and capable of only fulfilling their own prophecy of doom.

Sammy is a Clayton’s captain and how the rest of the team respond to him will be critical. The West Indies have always been different but the difference is now disruptive and how they long for a strongman like Lloyd or Richards.

Bangladesh is a constant fairytale. The opening ceremony was a country at its chaotic best. The passion and exuberance of the 50,000 outside the stadium was a story in itself. Many were outside because tickets were expensive and also hard to get.

But still they thronged because this was in many ways the closest the poor would get to their heroes. They had no time for cynicism or the futility of railing at self-serving bureaucrats. For them the joy was being close to cricket.

Shakib, their captain, is a formidable player. In Tamim they have an opener who combines the audacity of Jayasuriya with the self-belief of a young Ganguly. However, he is carrying a wrist injury and may not be at his best. The support cast is willing but not able. They will surprise but in the end will struggle to get to the quarters.

In the opening match against India last night, Bangladesh won the toss and put India in. This was, ostensibly, to negate the effect of the dew on the bowlers. They need not have bothered as Sehwag and Tendulkar, with 674 ODI’s between them, put on 36 in the first four overs with the help of six boundaries. There was a gulf in class between the teams as wide as the Grand Canyon. Goodbye fast bowlers!

Spin was introduced in the fifth over and Razak momentarily posed as Moses, conceding only two runs. Tendulkar went in a runout and this was the only way he was going to get out.

Sehwag, ever the entertainer, brought up his fifty with a six. This is a signature for Sehwag. Australian fans will remember him in the Boxing Day Test out on 195 trying to slog Katich for six! India was past 100 in the 14th over and eventually settled for 370 for the loss of three wickets and one was a run-out.

To put it bluntly, Bangladesh were pulverized and flattened. It was ugly if you were Bangladeshi harbouring hopes of an upset.

Zimbabwe is not even a pretender and may struggle to beat Kenya and Canada. They are not so much making up the numbers but will be one of the first casualties. Their first match is against an Australian side desperate to prove their credentials and may not recover from this first mauling.

Now for those with an outside chance. England will miss Morgan down the order. Pietersen up the top will have to produce three epics in a row if England is to go all the way. Naturally, I expect England to progress to the quarters. Should anything happen to Anderson or Broad I do not believe they have adequate cover.

South Africa will rely heavily on Kallis and Steyn, two of the best credentialed cricketers in any form of the game. But they will also need substantial contributions from Amla and De Villiers. If these four players perform then South Africa could meet Australia in a semi-final and that is where it will get interesting.

Sri Lanka will need Sangakkara and Jayawardne at the top of their games for three games in 10 days beyond the quarters. They will be hard to beat in the first quarterfinal. The semi-final could see them play India and I feel India will prevail through Tendulkar, Sehwag and Khan.

Finally some free and unsolicited advice to CA. The marketing men at Mercedes and BMW have more street smarts than all your consultants put together. You have three forms with varying degrees of appeal. A principle of marketing is segmentation and maximizing the demographics thereof. Cannibalisation is old soup and the prerogative of failed consultants.