Zimbabwe prosper a little but Price not quite right 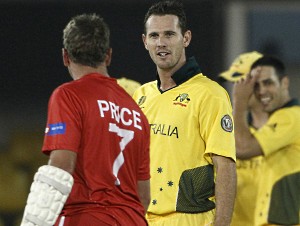 Zimbabwe's Ray Price, in red, has a verbal exchange with Australia's Shaun Tait, center, after the dismissal of Zimbabwe's Graeme Cremer in the Cricket World Cup Group A match in Ahmadabad, India, Monday, Feb. 21, 2011.

If Santana was running the ICC he would be singing “Let the Children Play”. This was a soundtrack from his million-selling album Festival. This current World Cup may be the last playground for the children. Australia played Zimbabwe overnight and it was supposed to be a massacre of the innocents.

Australia had only lost once in 27 previous ODI’s against Zimbabwe; the very first official match between the two.

Ricky Ponting was in no mood to be generous. He walked out for the toss and became the most capped (40) player in World Cup history.

Before the toss Alan Butcher, the Zimbabwean coach said: “Let’s be honest, if both sides play their best cricket, it’s very likely that we’ll lose.” This will fuel the debate surrounding the exclusion of Associates from the 2015 World Cup.

Ponting’s edict to his openers would have been to bat long. This, they did, but were slow. Especially Haddin who scored 29 off 66 balls. Zimbabwe’s bowlers had a game plan based on accuracy and energetic fielding. Australia were subdued and showed too much respect; as you would to a large creditor.

Mposu, all gangly limbs and bowling in the mid 130’s was Zimbabwe’s answer to Clint McKay. Steady and unthreatening.

His opening partner was Ray Price and he proved to be a wily campaigner complete with the annoying squeal of a Sharapova. He is a no-frills, no-name left arm bowler. He does not spin it and his bowling suffers from vertigo. But he is annoying like a little terrier dog. Snapping away at the heels and glaring with every delivery.

Prosper Utseya is no Graeme Swann but he is effective. His first five overs cost six runs and he had two maidens in his first seven. He trapped Haddin with a slow turning off-break that pitched on a perfect length. Normally, Haddin would have taken a short step and dispatched it over long on. This time he went back and was palpably in front.

Watson played with restraint and waited for the loose offerings. He waited till the 14th over before unleashing what could only be described as a forehand down the line off a short pitched Mposu delivery that sat up on its hind legs and begged to be hit. He followed up with a punched cover drive and lifted Australia’s moribund scoring rate.

The first 10 overs yielded 25 and the next five 28. After 15, Australia were 53 with no damage except to their ego. One expected this slow burning fuse to explode but it never happened.

Ponting replaced Haddin and was busy and light on his feet. He progressed seamlessly to 28 before being runout by a direct hit from Mposu fielding just inside the mid-wicket boundary. This was exceptional from the gangle-man and he has a rocket arm which batsmen will respect forever more.

Michael Clarke, unfairly maligned at home, showed his class with a run a ball 58 and, with short but dedicated blows from Hussey and Smith, guided Australia to a respectable 262. This was less than Australia expected but more than they looked like getting when they were 133 after 30 overs.

Australia will struggle against better bowling attacks than Zimbabwe if they play this conservative brand of cricket.

Haddin is at his best when he bats freely. Australia should be prepared to accept a run a ball 30 from him and the occasional fifty. To expect him to bat through the innings is onerous.

Ponting batted well in partnership with Watson and should try to open in the next match. England is going to open with Pietersen and as they showed this summer they have some good ideas. Langer, the batting coach, continues to be superfluous to needs.

Apart from an erratic first over by Lee, the Australian bowling was too fast and accurate for these children of an oppressed regime. There was a thrilling square drive for six by Coventry but it was instinctive and unsustainable.

At 4-44, after 13 overs, Australia eased the intensity and Zimbabwe meandered aimlessly to be all out for 171.

Mitchell Johnson was the best of the bowlers and sustained his hostility to the end. He did not try to bowl too fast and this helped his accuracy.

His 4 wickets cost only 19 and he did not bowl a wide or no-ball in nine and a half overs. Only one no-ball each by Tait and Lee and 3 wides in total. A disciplined performance and credit to the bowlers. They may have worked this out without the help of Troy Cooley.

Haddin will need to bat better but his keeping was first-rate and Paine may have little to do in this campaign.

Australia did what was necessary and seemed to have plenty in reserve. Post-match Ponting said the pitch was slow and keeping wickets in hand will be a priority throughout the campaign.

Watson was deservedly man of the match and he continues to grow in stature. If only he would not pout when he is dismissed.

In the end it was children playing against men. Zimbabwe may be the best of the Associates in this group but will struggle to beat any of the top four.