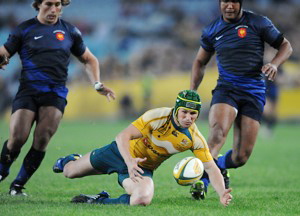 “It’s certainly a phenomenon in all walks of life … at one time, you’ve got it, and then you lose it and its gone forever” – Sick Boy, Trainspotting. Matt Giteau divides us it seems.

There are those who point to the good times, peaking somewhere around 2004, when he was part of a remarkable backline combination that began at the feet of George Gregan, ghosted toward the opposition in Stephen Larkham’s hands and barged ever forwards in the arms of Stirling Mortlock.

Back then he was part of something bigger than all of them; his talent not curtailed by his team-mates but exaggerated by them.

Then there are those who point to the later years and the problem he has presented to Australian rugby.

Not a nine, not a ten. Not a twelve anymore and never a thirteen. Could he have bloomed in the back three? Would he even get a run there now?

Both views of the man are right though for, as clearly as he did have it, he has since clearly lost it.

There were reports, usually sourceless, usually Growden, that painted him as an egomaniac, jealous of the number 10 and holding the team’s development to ransom.

They were easy to believe given his status as Australia’s highest paid domestic footballer in an underperforming team.

The thing is that with sportsmen it is harder to remember their good times. Musicians, artists, film-makers, writers; they all get to leave something tangible that can be taken in again and again. A performance that will always be the peak of their work.

Most sportsmen have only their last game. Beyond that the haze settles and other things get in the way.

Sentimentality favours those who have stood up on the grand occasions.

Sometimes its for the better: Jonny Wilkinson threw far too many genuinely terrible passes in his career to be put in the same class as Dan Carter or Larkham but his kicking and tackling drown out the doubters.

More often its for the worse: Ronan O’Gara’s rugby career will be looked back on with disappointment by many Lions supporters, Paul Briggs’ brilliant boxing career won’t be reflected on with admiration by the masses and Tiger Woods is spending millions on image consultants to make people forget his personal life.

The shame is that Giteau’s apparent arrogance will cloud our memories of a very good rugby player. That he isn’t the player he once was, if the opening quote is right, is nothing to be ashamed of. It happens to all of us.

My enduring memory of him involves me standing in a deep Edinburgh chill, warded off only slightly by the contents of my friend’s hipflask, shaking my head as the touch judges shook their flags at his missed kick at goal.

If I think hard there was a wonderful no-look inside flick pass to James Horwill a couple of years back that was as good as any I’ve seen but … for whatever reason that isn’t the Giteau that I choose to remember.

He has half a season of Super Rugby and potentially a World Cup with which to draw a close to this chapter of his rugby career. It would be great for him to leave a memory worthy of his talent.