Select your Dream 15 drawn from any sport 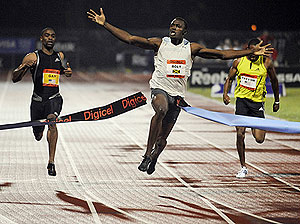 Well, I’m a little bit over sorting out the problem with scrums, the lack of an ARC, NSW internal politics, Waratah performance, and the continued selection of Baxter and Mumm. Let’s go with something more entertaining.

I have been playing a game with mates at the pub where we select a Dream XV. The catch is, while players can come from any era and are in peak form, you can only pick one player from any sport.

Below is my attempt. Anyone with a better knowledge of ice hockey is welcome to improve my choice at outside centre.

1. Asashouryuu Akinori – sumo wrestling. Look him up on YouTube and watch his back as he makes contact and wrestles. His back is perfectly straight – glorious. All sumo is about pushing people, and this bloke was one of the best.

2. Iron Mike Tyson – boxing. The perfect blend of size, crazy and skill that you want in a hooker, and with the right shape of neck! Serious hand eye co-ordination means he’ll master lineout throwing, with size and power for the scrums, fitness to get around the park, and gladiatorial instinct to relish contact. And, I dare anyone in the opposition to start a stink.

3. Mariusz Pudzianowski – World’s Strongest Man. Six-foot-one, one hundred and thirty kilograms, six pack – did I mention that he was the world’s strongest man? And a martial artist? Could make big Carl Hayman look like a flower girl. He would be a nightmare to scrum against, with the power coming through from the behemoths I’ve selected behind him being enough to break an ordinary human.

4. Glenn Thomas Jacobs – World Wrestling Entertainment. Sure, the sport might be fake, but at seven foot, 147 kilograms, and used to taking and giving a pounding, the big man Kane sneaks into the row. I do like some evil in my hooker and second row and feel quietly confident that this bloke and Tyson can deliver it.

5. Shaquille O’Neal – basketball. Big and dynamic, heavy on the lift, but can jump, and luckily we have the world’s strongest man at tighthead. Let’s just mention seven-foot-one and 147 kgs. Victor might have speed in the air but this guy has size and speed. Would hate getting cleaned out by this Shaq.

6. Emmitt Smith – gridiron. The NFL’s all-time leading rusher. A bloke with the most gridiron run metres ever could have pushed for a job in the centres, but a forward runner like Smith popping up on the inside shoulder of the halfback would be welcome in any team.

7. Richie McCaw – rugby union. We’re allowed one union player and I need to share my man crush. Richie is in, despite him being a dirty cheat that the refs don’t police properly. The last decade has been full of top-notch 7s and 13s but this guy is my favourite current player (my all-time favourite is Tim Horan followed by Nobody). Richie might fall out of my favourites list come September, but he’ll make it back in eventually – the guy is all class.

8. Daley Thompson – decatholon. He might not be Roman Sebrle, but the Czech only weighed 86 kilograms, and we need a bit more size from the best athlete in the team. A true all rounder who will contribute at lineout and in the loose.

9. Diego Maradona – football. Being Argentinian he has some exposure to rugby, and in charging to World Cup glory via the ‘Hand of God’ he has shown he can control a ball with his hands as well as his feet.

10. Andrew Johns – rugby league. Halfback in league equals five-eight in union. No athlete can make a fist of 7 unless they have played rugby a long time and put their heads in a lot of uncomfortable places. King Wally, Brett Kenny, Laurie Daley all got a look in, but Johnsy was just super and gets my vote.

11. Sébastien Foucan – parkour. Competition is against the philosphy of parkour, but if you are looking for elusive these guys are just amazing. Tackle Foucan and he would put a hand on your shoulder, vault over you and kept on going to the try line. Any sport whose philosophy involves efficency, elegance, and speed from A to B gets a wing spot in my team.

12. Bruce Lee – martial arts. Not the biggest guy around, but you know he will bring down every man who runs at him, as well as having hand and foot skill to burn.

13. Wayne Gretzky – ice hockey. Happy to be directed to an alternative here, but fast, hard skilful men who play on ice probably have what it takes to fill a 13 jumper.

15. Gary Ablett Senior – AFL. Please try an up-and-under or a box kick in with this cutodian at the back. Super under the highball, can return it with interest, and won’t shirk the hard stuff when found at the last line of defence. They called him God for a reason! I also wouldn’t mind seeing him chime in as the ball moves wide. He isn’t allowed a haircut either.

So tell me who you like from other codes?

Which athletes have the attributes that you would like to see in rugby? My tight five is brutal, the loosies are mobile and there is speed and skill to burn in the backs. That’s how I like to see footy. Who would you pick and how would they play?