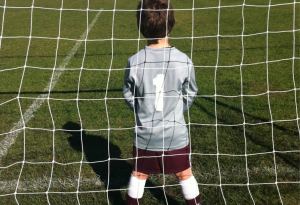 Here’s the backstory from AdelaideNow.com.au: SportSA chief executive Jan Sutherland said uniforms across a range of junior sports were recognised as a hurdle to participation.

“You do talk about the internet, computer games stopping kids playing sport, but uniforms can also sometimes play a role,” she said.

UniSA Professor of exercise science Kevin Norton reportedly said; “When you think about top-level athletes who play sports like netball and beach volleyball, their uniforms could be described as tight and short and the pressure to look and dress like them can trickle down.”

Apparently, that pressure and self-consciousness can stop your 14-year-old from playing sport, but evidently not from donning fishnets and a mini-skirt to head to the movie megaplex on any given Saturday.

Let me state this plainly; if your child is not playing any sport because he or she does not want to wear a netball skirt, then you – Mum and Dad – should be put in a pair of budgie smugglers and paraded before a packed Lang Park.

What do you think your job as a parent is? To allow your child to never feel the slightest discomfort? To pander to every insecurity? To bow down to every precious pre-pubescent emotion ?

Why do you think your child should be involved in sport? Fun.

Fun is one answer, certainly. But scoffing down cheeseburgers and sundaes and playing Super Mario Brothers is fun. You don’t need sport to have fun.

I accept the argument of sports administrators, psychologists and scientists that for the very young, competitive sport and a focus on winning is counter-productive.

Therefore, they have programs that are designed to directly compete with the Playstation as an outlet to have fun. Kudos, the littlies clearly adore this entrée to sport. This is not about those programs.

Also, I’m irritated that Badminton authorities want to bring into law the wearing of skirts and I’d happily make the argument that a Muslim woman should be able to play beach volleyball in a burqa if she so wished.

No, this is not an argument FOR putting kids in skimpy clothes that make them self-conscious – it is an argument AGAINST using such a ludicrous excuse for keeping your child out of sport.

Parents should value sport for their children because the job description of a Mum or Dad is to prepare a child for a successful adulthood. Sport can assist this process enormously.

So it is with sport.

A parent has few more effective tools than junior sport to impart this wisdom to a developing child. Sport teaches these life lessons in a way a million bedside lectures cannot.

It also teaches this: sometimes in life, you WILL have to do something you don’t want to do – because it is the RIGHT thing to do.

In adulthood, it might be saying no to a second dessert because your cholesterol is high, it might be visiting your sick Uncle who you aren’t so fond of because your Mum needs you to, it might be turning up to work when you don’t feel like it because you promised those clients you’d deliver the order by today.

In childhood, it might be playing in a uniform with horizontal stripes that aren’t so slimming, or wearing a leotard as you gradually become a stronger, leaner gymnast, or it might be playing fullback when you want to be striker – because that what the team needs.

My obsessive, life-long love of sport grew from facing a sad fact of life when I was maybe ten or eleven. I wasn’t like some of my skinny mates who ate all day and did nothing and still had ab muscles you could see. I needed to move to stay in shape and I soon worked out that sport is the most fun way to move.

That remains true as I approach my 40th birthday. And those skinny mates I mentioned? Yeah, not so much anymore.

My parents forced me into tennis. I hated it. They told me to stick it out for a year. I did. I still hated it. So they enrolled me in cricket – a sport I adored and played for 25 years. Ironically, I don’t play cricket anymore but live for my weekly hit of tennis.

And now, I’m the one kissing the grazed knees and rubbing the bruises as my little one learns to ride her bicycle. She gets smashed. She stacks it a lot as she tries to get better. It’s not easy to watch.

It goes against every protective, parental instinct not to say; “C’mon honey, this is too hard for you right now, let’s forget it for now and we’ll get a milkshake.”

But it is not my job to make her world one giant vanilla milkshake. It is my job to equip her to cope with the world as she grows up to be an effective adult one day.

I would love it if she grew up to win three Olympic gold medals in the velodrome at the 2028 olympics at Khartoum but I’d be even happier, if, 30 years from now, she is resisting the urge to tell her little one to quit – because life is about taking a few bruises to achieve something.

As Theodore Roosevelt put it, somewhat sexistly: “Never throughout history has a man who lived a life of ease left a name worth remembering.”

Life is about wearing skimpy shorts when you’d prefer not to and it’s not about having a parent that lets you off the hook every time you express a doubt about doing something.

Junior sport supports parents in teaching the inconvenient truths of our existence and any parent who allows their chubby kid to stay on the lounge because Little Athletics makes the kids wear a singlet is the one who really should be embarrassed.