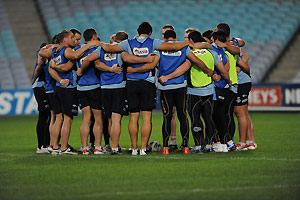 NSW selectors seemed to have learnt some lessons from the past, and, for the most part, have picked in-form players, in position. It sounds like an obvious selection strategy, but it’s certainly not something they have adhered to in recent times.

Looking for the team for game two?
NSW Origin team for second game

The inclusion of Dugan, Jennings and Soward, amongst others, indicates that NSW recognise that they need to score more points if they are to defeat Queensland. In the past, there have been some negative selections based on defence, but the reality is that the Maroons backline is so potent that no matter how strong a defensive side you select, they’ll still score their share of tries. So instead, why not be positive, and simply try to outscore them?

It’s a bold strategy, but after losing 5 series in a row, something had to change.

But whether that is enough to beat a rampant Queensland, motivated to send Darren Lockyer out a winner, remains to be seen…

Fullback: Josh Dugan
Whilst the ascension of Dugan to NSW fullback has been mooted for some time, I was still a little surprised to hear confirmation he had replaced Jarryd Hayne. Dugan is a special talent, and the selectors and Ricky Stuart obviously believe that Dugan can replicate his club moments of magic, at Origin level. Considering NSW’s struggle to beat Queensland in recent times, I have to applaud the gamble, even if I was a tad shocked.

Left Winger: Brett Morris
Blistering pace, in-form, good size and a great finisher. What else do you want from your Origin winger?

Right Centre: Mark Gasnier
Now that he has his ‘rugby league body’ back, ‘Gaz’ has returned to his customary standing amongst the game’s elite centres. He adds an attacking weapon the Blues have sorely lacked. His footwork is outstanding, his defence brilliant, and everyone is looking forward to his battle with Greg Inglis.

Left Centre: Michael Jennings
I have to admit to being surprised that Jennings got the nod. His chief talent is scoring tries, but he hasn’t been doing a lot of that this season. Whilst Idris is a natural right centre, he played on the left for Australia, and it wouldn’t have been a shock to see him picked on the left hand side for NSW. But Jennings is a dangerous attacking player, and a specialist left centre, and Ricky made it clear he didn’t want to pick players out of position.

Right Winger: Akuila Uate
Booked his spot with a powerhouse display in City/Country. Big, fast and strong, he takes a lot of stopping with his damaging runs. Looks suited to Origin football, and the rookie will enjoy playing outside Gasnier.

Five Eighth: Jamie Soward
The most talked about position, and most contentious selection. But as I have said before, he has earned the right to personally answer the question of whether or not he is up to Origin level.

His defence and attacking skills have been called into question in the past, but both have been excellent of late, especially his new-found willingness to attack the defensive line. Hopefully, the negative field goal tactics from Friday night were just an aberration.

Halfback: Mitchell Pearce
Not in great form at club level, but was superb in City/Country. Perhaps he just needs to get away from the crazy house that The Chookpen has become. Along with Soward, needs a big game, because Jarrod Mullen is breathing down his neck.

Lock: Paul Gallen (c)
Almost the lone automatic selection in the team. Tough, uncompromising and often tip-toes the line between aggression and foul play. But Gallen is made for Origin football. Hopefully the responsibility of captain will help him control his emotions, because he’ll need to lead by example.

Second Row: Greg Bird
Like Gallen, Bird was born to play Origin football, and is one of Ricky Stuart’s favourite players. Hard, strong and always itching for a contest, Bird and Gallen will take it upon themselves to show Queensland that NSW has plenty of passion as well.

Second Row: Beau Scott
I think Scott was lucky to be picked. He lacks Origin-type impact in both attack and defence. A solid player, no question, but I believe he’s the product of playing in a good team, rather than being a great player himself. He looked out of his depth last year, but to be fair, that was in the centres, not the second row. Still, you can be sure Queensland would prefer to face Scott rather than, for example, Anthony Watmough.

Front Row: Kade Snowden
Will be asked to provide the NSW pack with plenty of go-forward. Don’t underestimate his importance for the Blues, because he can make everyone’s job easier by laying a foundation for the rest of the team and setting the tone for the forward battle.

Hooker: Michael Ennis
It was always going to be a tight choice between Farrah and Ennis, but ‘The Menace’ got the nod, and one can only assume that his niggle was as much of a defining selection factor as his dummy-half play. In any case, he’s supremely talented at both.

Front Row: Jason King
Bit of a surprise, considering he has some fitness questions marks, but does provide plenty of the grunt needed for a State of Origin encounter. NSW will be counting on him to take the ball up and absorb the expected early onslaught from a fired up Queensland.

Ben Creagh
Surprisingly named on the bench, rather than starting. Nonetheless, his damaging runs out wide, and ability to run off Soward, will be a cornerstone of the Blues attack. Has been in great form for the Dragons, but needs to carry that into Origin, where even his biggest fans would have to admit that he has yet to make a name for himself. Well, apart from infamously running away from a fight.

Trent Merrin
I actually thought he might be in the starting line-up, instead of King. But perhaps it’s wise to bring him in off the bench. The fire and brimstone early clashes of Origin are no place for a rookie, but when the game settles down, look for the Dragons prop to enter with immediate impact.

Tim Mannah
Mannah has been one of the few shining lights in the Parramatta pack, and therefore gets another chance at Origin level. Might see game time earlier than expected, considering Jason King can’t possibly be 100%.

Dean Young:
A solid player in good form, who certainly has the toughness required for Origin football. Can play hooker or anywhere in the back row, but it’s debatable whether NSW had the luxury to pick Young on the bench, when a more skilful backline player may have been a better idea.

Jarryd Hayne
Hayne has probably been the Blues best player over the last two or three series and his absence will raise a few eyebrows. Particularly north of the border, where he may not be liked, but is extremely well respected.

It’s hard to believe that a team that has lost five series in a row can afford not to pick a player of his talents, but Ricky Stuart hinted that he doesn’t view Hayne as a fullback, yet wouldn’t pick players out of their club position – thus dooming Hayne.

Robbie Farrah
With Soward getting the nod at number 6, I thought NSW may need the extra creativity that Farrah provides with the ball in-hand. The selectors thought otherwise, but he must have been very close to getting picked.

Kurt Gidley
Perhaps the thought of a less than 100% Gidley was too much of a gamble. Whatever the reason, his ability to run at tired Queensland legs, or interchange for any injury to the backline, would have been useful off the bench.

Jamal Idris
Despite his weaknesses, Queensland would have preferred not to have to deal with him. That alone suggests to me that he would have been a worthy selection gamble.

Tom Leahroyd-Lahrs
NSW’s best forward last year, and returned to form in the City/Country game. But a slow start to the season has cost him a spot.

Read all the info for State of Origin 2011