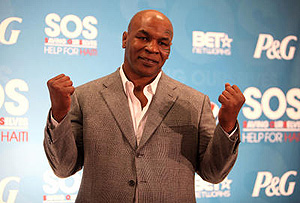 Hey Molly Meldrum, do yourself a favour and right this equation down: Tyson + Chess x Pop Culture = Sport’s greatest contribution to music.

The man who most recently has been seen on Dancing With The Stars Argentina (don’t ask) but was originally the youngest heavyweight boxing champion of the world, not only stars in the upcoming movie “Hangover 2”, he sings part of the soundtrack.

Yes, the tone-deaf, accidentally spoken-word version of “One Night in Bangkok”, originally made famous in the musical Chess, is something to behold. Behold a bit of it here.

When I played it on the radio recently, one listener reviewer stated; “It made me want to bite my own ears off.”

He’s right, it is an abomination BUT, as is so often with Tyson, it captures the imagination. It is so perfectly awful, it’s awfully perfect. I bet you share it or tell a friend about it. It’s like boxing itself, fundamentally misguided, awkwardly politically incorrect, utterly without class and yet undeniably entrancing.

Tyson is just the latest in a long line of sportspeople who’ve decided the world would be enriched by exposure to their full array of talents.

And not a single one of them is better than this offering from Tyson. It’s the best, because it has virtually nothing to beat.

The one that comes closest?

But for mine, he is still runner-up.

I have nothing but respect for Lionel Rose and his contribution not only the sport but bringing Australians of various races together, but if he is looking down from the big boxing ring in the sky, he knows I would be lying if I didn’t tell you his musical contributions are the very least of his legacy.

I guess it was from a certain time and place that has long since past. Respect for the recently passed dictates I should go no further but of offer Exhibit A: Anthony Mundine rapping, like his boxing, proves that attitude is no substitute for talent.

There have been others that have tapped the zeitgeist, such as Mark “Jacko” Jackson’s “I’m An Individual.” Be warned, you can’t “un-see” this.

Perhaps only topped by “Me Brain Hurts” (sic).

Irredeemably awful but somehow still memorable after all these years…. Oi!

But sportspeople-cum-singers generally neither play hard nor do good.

Warwick Capper shepherds Jacko out of top sport in AFL’s Hall of Shame with “I Only Take What’s Mine”:

Paul Harragon’s “Gold” tips out Eric Grothe Jnr’s “Everyman” for the “Most Awful Rugby League Joke Song,” only because I’m not sure Chief was joking.

Matty Johns’ character songs will not be discussed in such a high-class forum as this.

Now there are others, like former North Sydney halfback Jason Martin and Olympic athlete Paul Greene, who have played music. But these are true musicians who used to be good at sport, not sportspeople who decided they could sing.

And in a whole other category, the likes of “Six and Out”, featuring Brett Lee and Richard Chee Quee – a group of cricket mates who also decided to form a band, played some pub gigs, had some fun and never tried to pump a dumb punter for cash.

But wait, Brett Lee, just before you walk out of the sheds, I haven’t finished with you just yet.

Your cynical single featuring Asha released in the Indian market has justified every bad umpiring decision we get on the sub-continent for the next three decades.

The “Sporting Song’s Worst XI” wouldn’t beat the Vanuatu on a sticky wicket – and that’s why Mike Tyson is a knockout.

How does a human get this high?

The company’s president says he tried to hold out and keep events running as long as possible, despite the ever-growing impact of the coronavirus.