How much did our World Cup bid really cost us? 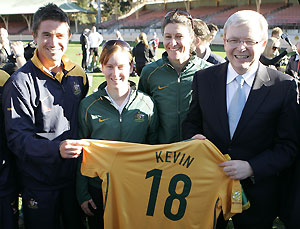 We already know Australia’s bid to host the football World Cup cost taxpayers more than $45 million. But in the wake of stunning corruption allegations made against FIFA presidential challenger Mohamed Bin Hammam this week, did the bid cost us more than just cash?

At the start of the week, Fairfax investigative journalists Richard Baker and Nick McKenzie revealed the federal government was not informed by Football Federation Australia of their decision to hire Peter Hargitay and Fedor Radmann as consultants.

Hargitay elicits nine separate references in “Foul,” Andrew Jennings’ lengthy 2006 exposé on FIFA corruption, and the UK-based journalist made an appearance on the ABC’s Lateline during the week in which he slammed the FFA’s handling of the bid.

“You got conned out of lots of money and now you’re still running this crap that somehow Australia nearly got it,” Jennings said of a multi-million dollar campaign which yielded just one vote.

It’s an allegation backed up by Baker and McKenzie, who wrote that Mersiades “expressed disquiet about the consultants in emails to the government.”

Despite signing a confidentiality agreement upon her dismissal, Mersiades emailed a former colleague during the week to confirm Buckley told her she was sacked because of pressure from Hargitay – an allegation the FFA later said was “unsubstantiated.”

Whatever the machinations of the dismissal – the explicit details of which are between Mersiades and the FFA – the end result is that Australia has lost a well respected, passionate advocate of football.

And with the A-League in particular struggling to maintain traction in the crowded Australian sports market, surely administrators of Mersiades’ calibre are something the FFA can ill afford to lose.

There’s some irony in the fact such dissent was revealed in the same week Ben Buckley faced the music from angry supporters at Sydney’s fan forum.

Buckley should be applauded for fronting at a time of growing fan anger, even if some of his responses sounded more like Orwellian doublespeak than the thoughts of a man in tune with his audience.

He of course has a new head of communications in Kyle Patterson to fall back on should the message ever got lost, with Patterson’s appointment widely applauded following an 18-year career as a broadcaster with SBS.

But Patterson’s new brief is to control the information coming from FFA headquarters, and as we’ve seen with the axing of Mersiades, the game’s governing body doesn’t take too kindly to those not singing from the same hymn sheet.

So don’t expect someone like Andrew Jennings to go knocking on the FFA’s door for a friendly chat, because I’m sure they’d get short shrift from experienced media man Patterson and his colleagues.

And Australian fans will remain none the wiser about what really went on behind the closed doors of our failed bid, despite the fact Hargitay and Radmann were “paid millions of dollars of taxpayers’ money,” according to Baker and McKenzie.

So how much did Australia’s failed World Cup bid really cost us?

It cost taxpayers plenty of cash at a time when A-League clubs are struggling desperately for revenue, even if the costs of such bids invariably run into the millions.

It cost the FFA a well connected, highly respected administrator in Bonita Mersiades – a woman who at one stage was the Socceroos’ team manager and who has a long association with the game.

And if the FFA tries to close ranks on journalists asking questions about how the bid was funded and how much consultants were paid, ultimately it could cost Australian football its integrity.