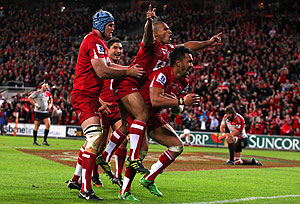 Digby Ioane of the Reds and team mates celebrate after scoring a try during the Super Rugby final between the Queensland Reds and the Crusaders at Suncorp Stadium on Saturday, July 9, 2011. (AAP Image/Bradley Kanaris)

Match report: In front of a record crowd of 52,113 at Suncorp Stadium, the opening 30 minutes was scoreless as both sides had few chances with a scrappy breakdown.

Referee Bryce Lawrence allowed a messy ruck, and possession changed hands often but the Crusaders had the better of possession in the early stages.

Dan Carter had the first chance to put points on the board, but missed a regulation penalty in the 16th minute.

But it was Quade Cooper who put the first points on the board, kicking a penalty after a Crusaders’ infringement to put the Reds ahead 3-0 after weathering an opening Crusaders storm.

After the restart, the Crusaders had a number of phases attacking the Reds’ line, and it was left to the genius Dan Carter to create the first try.

Facing a solid defensive line, Carter grubbered for himself out wide to regain and slice through for the first try. Cooper failed to pressure Carter as he crossed the try-line, allowing the ball to be put down under the black-dot. It was the Reds 6 – Crusaders 7 after 34 minutes.

The Reds were awarded a penalty in the 38th min, after Cooper chipped ahead but was tripped by Brad Thorne – deemed accidental by the referee but still enough to concede a penalty. Cooper converted to be just a point behind going into halftime.

The Crusaders started the second half strongly, with Sonny Bill Williams creating a hole for Fruean who put Carter through a gap, but he knocked on a tough grab.

The Crusaders built further pressure on the Reds, and Brad Thorn ignored a five-man overlap on the left to push over the line himself and while he thought he scored, the referee couldn’t see anything and the video replays were inconclusive. The Reds dodged a major bullet.

However, after the restart, the Crusaders won a penalty and Carter kicked a simple goal to put the Crusaders ahead 10-6 in the 48th minute, with the Reds under serious pressure.

In the 51st minute, Digby Ioane split the Crusaders defence after a bomb was collected by Will Genia, who spun it wide to Cooper and then it was quickly on to Ioane, who showed blistering pace to score a crucial try. Ioane jigged a dance to celebrate, with Cooper converting from in-front and the Reds hit the front 13-10.

The Crusaders hit back in the 56th minute after an offside call, and Carter kicked a 40m penalty from in front to square up the game 13-all.

The 68th minute saw a game changing moment. With nothing on, Genia busted through the middle of the ruck to find space. He ran some 60m with the Crusaders holding off and covering runners, but Genia had enough pace to cross the line.

Cooper missed the conversion from wide, but the score was 18-13 to the Reds with just ten minutes remaining.

The 75th minute saw another penalty to the Reds, and another tough kick on the left sideline from around 40m out for Cooper. It was an important kick, but Cooper pushed wide again. Had he slotted the kick, it would’ve sealed the game at 21-13; but the score remained 18-13 with five minutes to go.

The Reds fought hard in the final minutes but the Crusaders had the final say with the possession after Samo knocked on with one and a half minutes left on the clock. The Crusaders put together a number of phases after the siren but a knock-on finally finished their attack and the Reds held on for a famous victory.

It marks the end of a massive turnaround for the Reds. Queensland entered the professional Super rugby era with back-to-back Super 10 titles, but finished in the last three sides from 2004-09.

Read the game as it unfolded on our Live blog of the match.