Cadel Evans shines in the Pyrenees 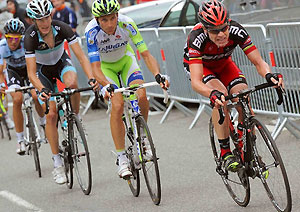 Some questions were answered and many more were being asked after the completion of the first big mountain stage of the Tour.

The first day in the Pyrenees – Stage 12 from Cugnaux to the ski station at Luz Ardiden via the Col de Tourmalet – saw Cadel Evans announce himself as one of the men to beat for the yellow jersey.

He produced a solid performance up the final climb of the day to finish fifth, 30 seconds behind the eventual stage winner, Euskatel’s, Samuel Sanchez.

Sanchez’s winning move was made on the descent of the Tourmalet. He broke away in a small group which also contained the eventual second place getter Jelle Vanendert.

They were both helped by the power of his Omega- Pharma teammate, Phillipe Gilbert in chasing down Jeremy Roy and Geraint Thomas, the first two riders over the Tourmalet .

By the time the big boys decided to put the pressure on with only a few kilometres left to go in the final climb, the gap had become insurmountable.

Andy Schleck made the first attack with 4kms to go but it was the attack of Frank Schleck, who looked the fresher of the brothers, with 3km left which determined the look of the race to the finish.

He was able to get away and was able to make some time on his rivals. A controlled Cadel gave steady chase and only Andy and Ivan Basso were able to go with him.

In the final wash-up, Cadel did not lose any time to Andy Schleck and gained 13 seconds on a struggling Alberto Contador.

However, he did lose 20 seconds to be Frank Schleck to be overtaken in the standings. Frank is now in second place, 17 seconds ahead.

Frank’s excellent performance left many people wondering as to whether he will be the main challenger for the yellow and not his favoured younger brother. He certainly looked the fresher of the two on the final ascent.

Thomas Voeckler became the pride of the nation by retaining the yellow jersey on Bastille Day. Not many people had given the Frenchman much hope at the start of the day, but he put in a dogged effort to finish in eighth place and only 50 seconds behind Sanchez.

Contador’s sluggish performance today might have signaled the end of his reign as tour champion. There is definitely something amiss. Losing 13 seconds in the final kilometre to his rivals has set the alarm bells ringing.

Blame it on the Giro, his dodgy knee or the stress of the impending doping decision, It looks like it will finally see him dethroned.

Tonight’s 152.5km stage, the second in the Pyrenees, from Pau to Lourdes does not have a mountain top finish, although it does have one all-category climb.

Expect Voeckler to retain the jersey for one more day. He will probably need a miracle to keep it on Saturday.

Expect Contador to visit Our Lady of Lourdes and to “drink at the spring and wash in it”. It looks like divine intervention might be his only hope.