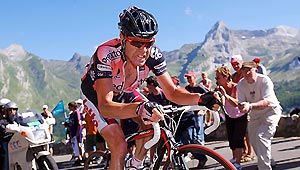 Lance Armstrong once noted that professional cyclists looked like vampires. Cadel Evans, with his large reptilian eyes and nervous disposition, looks more like an exotic lizard.

Evans was born in the Northern Territory, home to a number of reptile species, but he’s not your typical Australian rural type.

Married to an Italian classical pianist, he resides in Switzerland, reads Tintin and is an active supporter of Tibetan independence and animal rights (not including those of the pigs that go into the antipasto at his favourite restaurant in Barwon Heads).

“Physically, I was completely unsuitable for almost all Australian school sports,” he pointed out. Nor does he have the laconic personality of the four other Australians to have held the Tour’s yellow jersey: Phil Anderson, Stuart O’Grady, Brad McGee, and Robbie McEwen.

The shrill voiced, highly sensitive and difficult-to-interview Evans can alienate some people, including his own teammates.

When listening to him talk I can’t help imagining the Mason Verger character from the film Hannibal, the deranged, disfigured and only surviving victim of Dr Lecter, calling out to his doctor: “Cooordeeelll!”

As with Lleyton Hewitt, people want Evans to win the Tour de France because he’s Australian, but wish he was someone else.

The French public wouldn’t mind if Evans won either because the rider they despise the most, if the boos and shouts of
derision echoing around the Roman ampitheatre during the opening ceremony were anything to go by, is Alberto Contador.

Still seething from the meticulous domination of their race by Lance Armstrong, the French can’t face the prospect of another non-French multiple winner.

They have also been suspicious of the apparent ease of his victories, his ability to repeatedly attack on climbs and his marked improvement as a time triallist.

Riding for the Astana team suspected of doping (and hence not invited to the 2006 and 2008 Tours) and his positive test for clenbuteral at last year’s race have meant the Pyreneeian mist hasn’t been the only cloud hovering over his head.

Contador is not entirely popular with his main rivals either. Evans is constantly pointing out that he is a sly competitor and is not convinced he’s injured or fatigued from one of the toughest Giros ever.

Last year Contador infamously gained time on Andy Schleck (the exact margin by which he won the race) after the latter’s chain came loose. After the stage he winked at, and sought a hug from, the tall Luxembourger.

Later during an interview, Schleck, in a frightening Germanic (or was it Luxembourgish?) tone, proclaimed “My stomach is full of anger, and I want to take my revenge… I will take my revenge!”

He didn’t take it then and was quite happy to put his arm around Contador (who had the victory champagne in his hand) during the obselete final stage.

I’m sure Schleck is planning to serve his revenge cold – up on the Col du Galibier or Alpe d’ Huez this Friday. Contador is a good winner. Amazingly, he has not lost a Grand Tour. Until he does we won’t know if he’s also a good loser.

To win the Tour de France you must be a superb climber, an excellent time triallist and the leader of a strong committed team.

Evans has never been the latter. Good riders have often appeared unwilling or unable to sacrifice themselves for him. A prominent example was Yaroslav Popovych, recruited by Evan’s Silence-Lotto in 2008 from the Discovery Channel team in a failed attempt to inherit some Armstrong magic.

Perhaps they should have offered him one of those white lunch bags.

Evan’s most talented team – the German outfit T-Mobile of 2003 and 2004 – didn’t consider him worthy of a Tour place.

Many people think Evans is his own worst enemy; that he gets too stressed to maintain the necessary concentration and lacks the confidence to attack.

To lose consecutive Tours by a combined margin of one minute twenty three seconds would be devastating for any of these driven professionals. But for a serious worrywart like Evans it was expected to end his career.

Former cyclists, like five time winner Bernard Hinault and Sean Yates, haven’t rated him, citing his inability or
unwillingness to attack during the decisive mountain stages.

In a preview of this year’s race Yates proclaimed: “I expect Schleck and Contador to be head and shoulders above the rest”.

It is widely accepted in the ProTour that Evans isn’t a cheat because he doesn’t look like one. He suffers too much: the permanently tilted head, the chin looking like it has been cleaved by the elements and a mouth forced open by a body working above its oxygen levels.

He doesn’t have the perfect build for a climber: next to the insect Contador and the skeletal Andy Schleck he looks like a solid man.

He isn’t comfortable standing on the pedals; preferring to slug it out as long as possible on the saddle, relying on his larger thighs and upper body for power.

But in the last one or two kilometres of the big mountains, where the Tour is won and lost, he has to haul himself out and match the climbing ‘dance’ of the lightweight heavyweights.

In previous Tours, Contador and Schleck would be seen swishing along, smug and sweatless, while over their shoulders was the red-eyed, haunted countenance of Evans as he tried desperately to match their surges.

But this year he has looked more assured. For once he has a team that understands his peculiarities (like requiring an hour’s solitude after a race), and is fully organised and committed.

Leading the charge and keeping Evans near the front of the peleton on the wet narrow roads (Saxo Bank Sungard’s failure to do the same for their leader may have already cost Contador the race) has been Armstrong’s most famous and now disloyal ex-lieutenant George Hincapie, and Marcus Burghardt.

He has been expertly chaperoned by Ivan Santaromita and Michael Schar to the front after ‘nature breaks’ and mechanical mishaps.

They have tried hard in the hills but like all the teams have been left for dead by the Leopard Trek train. Hincapie was looking decidedly haggard early as he was dropped on the Col de Tourmalet and the best performer for Evans in the mountains, Steve Morabito, disappears when the gradient reaches 10percent.

Evan’s big luminous eyes are a window to his pain so to stop his rivals looking in he has kept his sunglasses on. Not even the ever-leering Schleck could have identified a weakness yet. While scrambling in response to repeated attacks his thin wide mouth has remained composed, betraying nothing.

Tonight the final test for Evans begins with the first of four stages in the Alps. The relatively poor time-triallist Schleck has to gain a substantial lead here. He has the ability, desire and arrogance to do it: “Once we get to the Alps that’s when we will make a difference.”

Contador’s boss Bjarne Riis told us what we already know: “If Alberto had a bad day yesterday, when the good day comes then I believe the whole Tour will change again”.

Cadel may be hard on the ears, and the eyes, perhaps a little too precious for some, but I like him. It’s easy to forget that he has been the only Australian capable of winning the greatest cycling race. We should all get behind him.

In 1972 when the Australian Labor Party became fed up with losing, it launched the “It’s Time” campaign. Perhaps a television ad could be commissioned for Evans showing celebrities (Eddie McGuire, David Koch and Karl Stefanovic not to be invited) singing:

“It’s Time for moving Evans,
It’s Time for proving, Yes,
It’s Time to stand up and attack Cadel,
Make them wish they were in Hell!
Get in Contador’s and Andy Schleck’s face,
It’s Time you won this goddamn race!”.

Sprinkled throughout his Tour diary are examples of his famed negativity (“I don’t want to know how messy that could be”, “twisting dangerous roads…not to mention the wind… Would ‘carnage’ be the best description?”) and some of his countrymen are intent on bringing him down.

McGee is Contador’s directeur sportif and Richie Porte his number one domestique. Stuart O’Grady, in tandem with the honorary Australian Jens Voigt, has been driving the peleton up the mountains, crucifying most of Evans’ teammates in the process.

But Evans can suffer more than any other rider. For that he deserves, finally, to be Tour champion.

On July 24, if there is any justice in this brutal sport (and of course there isn’t), Cadel Evans will be standing on the Champs Elysees with the Arc de Triomphe behind him, a rider either side of him, and a fluffy little lion pressed against his lizard-like lips.