The end of the centurion goal kickers

Before Lance Franklin in 2008, who was the last player to kick 100 goals in a home and away season? Three-time Coleman Medallist Matthew Lloyd? Nope. Two-time winner Brendan Fevola? No, the closest he got was 99 in 2008.

Was it Jonathon Brown, Fraser Gehrig, Alastair Lynch or any of the other gun forwards of the competition throughout the 2000s?

No, no, no and no. It was the great Tony Lockett in 1998 when he kicked 107 for the Sydney Swans on the way to his fourth Coleman Medal.

In the 1990s, we as football fans were truly blessed. It was the era of the power forward. Lockett, along with Hawk Jason Dunstall, Geelong’s Gary Ablett Snr and Crow turned Docker Tony Modra shared 11 of the 12 Coleman medals between 1987 and 1998.

While the 90s was an amazing generation that boasted some of the greatest forwards to ever play the game in Lockett, Dunstall and Ablett, not to mention other players such as Wayne Carey, Stephen Kernahan, Matthew Richardson and also Eagle Peter Sumich, that’s not to say this current crop of forwards are short on talent. But will we ever see another century kicked in the home and away season?

Forwards in this era are asked to do a lot more than in previous years. With forward presses, flooding, increased requirement for forwards to present up the ground and bench rotations, it’s not a stretch to say that the role of a Lance Franklin or Jack Riewoldt is absolutely nothing like the role Lockett or Dunstall played in the same position.

Jack Riewoldt is probably the closest player we have to a traditional full forward. Yet, against Essendon on Saturday night where he was soundly beaten by future Bombers star Michael Hurley, Riewoldt was routinely leading for the ball up on the wing trying to get the ball over the top of the Bombers zone.

While that may be a good team tactic, it’s no coincidence that with tactics like these, forwards aren’t kicking bags of goals. Riewoldt last season won the Coleman Medal in his breakout season. His total of 78 goals was the fourth time since 2002 that the seasons leading goal kicker hadn’t kicked 80 goals, the lowest of those Gehrig in 2005 with just 74.

Of the top five, Franklin’s 88 shots suggests he should be closer to 60 or 65 goals, but the other four have all been quite accurate as well. On the pace displayed, Franklin’s 3.5 goals a game would see him finish the season with around 70 goals, and probably a second career Coleman medal.

So much so has the ballpark changed for centurion goal kickers, Richmond told anyone who would listen that this season their aim was for Riewoldt to kick fewer goals. They said their focus was too heavily centred on the young guy in the number 8 jumper, and they had become far too predictable.

If they were to improve, they had to find more avenues to goal. This year they have done that, with Tyrone Vickery (27 goals), Dustin Martin (24) and Jake King (21) all becoming legitimate goal scoring threats. Last year, no Tiger kicked more than 15 goals for the season. Vickery, Martin and King are already past 15 and with six games to go, Trent Cotchin is on 15 for the season and Robin Nahas 14. Better for the team yes. But not for the full forward.

So in the era of presses, zones, rotations, altitude training and versatile forward lines, will we ever see another player kick his 100th goal for the season, and the crowd stream on to the ground from all pockets to celebrate?

Maybe, but don’t hold your breath. It won’t be anytime soon. 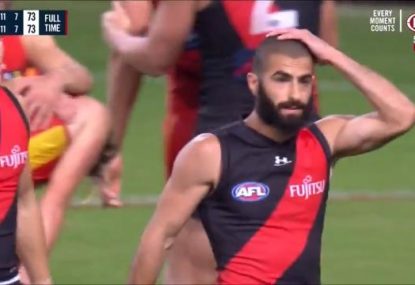 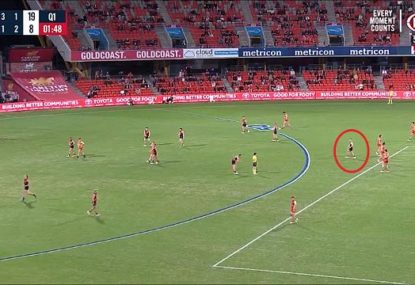