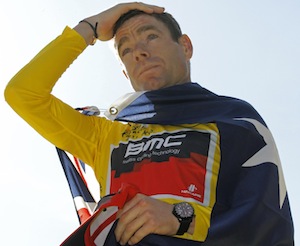 Cadel was the name of three Welsh kings. Today Cadel Evans is the King of France. The first Australian to win the world’s most gruelling sporting event, the Tour de France – and at 34, the oldest champion since World War II.

Last night, the Katherine-born cyclist wiped out the memories of two close seconds in 2007 and 2008 to ride down the Champs-Elyesse to be crowned, supported by the Australian national anthem, with the Australian flag draped around his shoulders.

It sent shivers up the spine.

Every one of us has jumped on a bike at some stage. But it’s hard to get your head around cycling a three-week tour of 3,430.5 kilometres over 21 stages.

With just two rest days, how these ironmen recover day after day from massive mountain climbs, battling exhaustion, injuries, and the quirks of Mother Nature with a mixture of heat, cold, and driving rain, is beyond belief.

Tough? There are none tougher.

The 2011 edition welcomed 219 starters, and with 31 withdrawals en route, the balance ended their torture last night in what has been rated one of the greatest of the Tour de France campaigns that started in 1903.

But none greater than for Cadel Evans.

In a message to Australia after claiming the yellow jersey in the penultimate stage, he said: “I hope you all enjoyed it, from where I sit it’s been good fun.”

The career high for Evans took two decades, but he’s the first to admit it was worth every painful second of the journey.

Originally a champion mountain-biker, winning the World Cup in 1998 and 1999, Evans switched to the road in 2001, at the suggestion of Phil Liggett, the television voice of world cycling.

Those two disappointing Tour de France seconds in 2007 by 23 seconds to Alberto Contador, and 2008 by 58 seconds to Carlos Sastre, led to the Evans international breakthrough in 2009 as the world road cycling champion.

Now the ultimate. So where does Cadel Evans rate among the great achievements of Australian sport?

* Right up there with the America’s Cup victory in 1983 with John Bertrand at the helm, ending 132-years of American domination, the longest winning sequence in world sport.

* Don Bradman’s 100 first-class centuries in 1947, finishing his stellar career with 117. He is still the only Australian batsman to achieve the feat, the closest Justin Langer (86), Darren Lehmann (82), Matt Hayden (79), Steve Waugh (79), and Stuart Law with 79 – all retired. Ricky Ponting leads the current Australian batsmen with 73.

* Jimmy Carruthers, the first Australian to win a world boxing title, knocking out South African Vic Towell in 1952 in Johannesburg in the first round of their bantam bout. Carruthers landed 147 punches, Towell threw one punch – that missed.

* Margaret Court’s Grand Slam in 1970, included in a record 24 Slam singles titles, the most on both the women’s, and men’s tour. The International Hall of Fame states: “For sheer strength of performance and accomplishment, there has never been a tennis player to match her.”

* Dawn Fraser, the first woman to crack the one minute barrier for the 100 freestyle with 59.9 in 1962, lowered to 58.9 in 1964, a world record that stood for eight years until Shane Gould broke it with 58.5 in 1972. Dawn the only Australian to win three successive Olympic golds in the same event.

* And Herb Elliott’s sensational 1960 Rome Olympics gold medal in the 1,500 track, smashing his own world record, and winning by a still record margin of 30 metres. His time of 3.35.5 would have won six of the next eight Olympics, arguably the greatest 1,500 run in track history. Elliott retired at 23, unbeaten throughout his career over the distance, and the mile.

He did it alright – Cadel Lee Evans has joined the elite of Australian sporting heroes.