What is the A-League season waiting for? 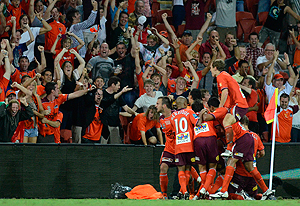 The A-League is still two months away. Can you believe it? It feels like an eternity. However, you wouldn’t know about it. As the European season gets ready to kick off in the next two weeks, it is hard to believe that we will be waiting until October 8 before we see top level football in Australia.

It will be 209 days from the last game of last season to the first of this year, or six months and 25 days since the unbelievable scenes at Suncorp Stadium of the A-League grand final on 13th March.

Agonisingly long for supporters of the game and long enough to slip from the consciousness of sports fans who follow football in the summer months.

The AFL’s gap is 173 days and the NRL’s gap is smaller again at 159 days. Both of course have high profile pre-season fixtures that make those gaps seem smaller still.

We recognise a later start to the season avoiding a clash with the AFL and NRL’s finals could be a positive. We also acknowledge the benefits of giving our players matches for longer into the northern hemisphere’s season, enhancing the potential for players to represent the Socceroos in key matches.

However this is still a very long break.

Of course with the pre-season cup competition ending a couple of seasons ago the break feels even more extended.

Where is the hype of the season ahead? The recent friendlies against Celtic that three teams played seem a distant memory already. The momentum for the season is lost.

Is the A-League waiting for Harry Kewell to sign and launch the season for them? It would be sad if it was. They should be promoting now: why not put a countdown clock in Martin Place, The Valley or Federation Square.

While I understand the shift in the season launch to avoid a clash with AFL and NRL finals, the question must be; how will any publicity during September for the A-League season launch get space ahead of St George and Collingwood’s attempts to go back-to-back?

Then there is the spine-chilling thought for the FFA, what if there is a draw in the AFL grand final again? If this occurred the season’s launch at Etihad Stadium between the league’s two most successful clubs would be better off applying to be the curtain raiser at the MCG.

With only three drawn grand finals in 115 years hopefully this does not happen.

The V8s are not for everyone but Bathurst tends to consume a large amount of forest each year and with the race around Mount Panorama that weekend, it’s just another big ticket item to compete with.

As a country with as many diverse sporting options to attend as we do, on any given weekend, the A-League will always have competition in Australia.

Looking ahead to the fixture we can be thankful that we wait until week nine before we see a midweek clash with Sydney hosting Perth in a yet to be confirmed regional venue.

While I liked the midweek fixtures it seems the public didn’t and restricting these to holiday times can only be good for school children. The FFA must earn a tick to this element of the fixture, but from season to season, ultimately it’s a long wait between drinks.

The introduction of a national cup competition seems a while off, so there won’t be a season extension through fixtures there.

As mentioned there are always going to be clashes with other sports and events, so let’s not be scared of these. The FFA should have the courage of its convictions to know that enough people love the game to come to a longer season.

Play each team home and away twice rather than the unfair three times we have now. Start the season in line with Europe and may football grow from strength to strength.