State of game: AFL and NRL in Queensland 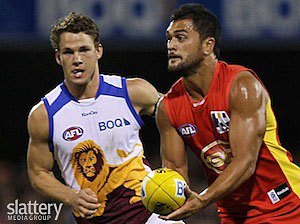 Karmichael Hunt of the Suns in action during the AFL Round 07 match between the Gold Coast Suns and the Brisbane Lions at the Gabba, Brisbane.

As we near the end of the Gold Coast Suns’ first AFL season, it’s worth taking a look at the situation in Queensland almost a year after they were launched.

One of the reasons cited by people like myself for the expansion was always about growth for the code, and I want to see if the figures back me up. For reference’s sake, and because I get slammed for ‘ignoring’ other codes, I’ve included NRL references.

For the AFL, both teams are currently in the lowest bracket on the ladder. For the NRL, the Broncos and Cowboys are likely to be finalists, while the Titans are likely to win the spoon.

I’ve started with the easiest one, and an AFL favourite, but not necessarily the gimme in Queensland that it might have been in the southern and western parts of the country.

This can be partially explained by the reallocation of blockbusters normally played by the Lions at the Gabba being taken by the Suns to Carrara.

Incidentally, the AFL stated at the start of the year that a 20k average was this years target for the Suns. That target looks like it was pretty realistic from the current figures, just 500 shy of that mark.

Overall though, 363,000 people have attended AFL matches in Brisbane or the Gold Coast, and another 10,832 to a Richmond home game in Cairns recently for a total of 374,222. This represents a total aggregate crowd increase of 23 percent in 2011.

Another AFL strong point. Brisbane memberships in 2010 totalled 29,014. In 2011, the Lions experienced a big drop in numbers that can be only partially atrributed to financial hardships associated with the flooding in Brisbane earlier in the year.

Some can be blamed on poor perfomance, and it’s also likely that some of these at least were cannibilised by the introduction of the Suns. Lions members dropped to 20,792.

NRL memberships dropped in 2011 by just 109 (0.4 percent), with only the Cowboys showing a decrease – all of which can be explained by cyclones and floods in northern Queensland this year.

That drop is almost entirely shown in the Cowboys’ membership numbers. Total NRL members of Queensland teams in 2011 is 28,800 – just 6,056 behind the two AFL teams in the state.

Note: I refer only to metro viewing figures here as I don’t have last year’s rural figures available.

Foxtel is a little harder for me to quantify, but for the sake of argument I’ve taken the raw figures for viewing of Queensland teams only. In this admittedly the AFL receives a huge boost due to the inclusion of the Suns, which gave them a 67 percent rise in viewers of matches involving Queensland teams (an increase of almost 1.4 million).

Queensland NRL teams experienced a very slight drop in viewer numbers – quite likely more than made up by rural figures, it must be said – of just 0.5 percent (33,000).

On raw data, you would have to say there’s some growth there. AFL crowds and members are up more than 20 percent on last year’s single team figures, and while some have been cannibilised from the Lions, the Suns experiment is alive, well, and growing.

Free-to-air figures are disappointing, however Foxtel figures are vastly improved, and probably go some way to justifying the belief that the extra games do matter for TV rights purposes.

For the NRL, you’d expect the member figures to be closer again next year, and while crowds were down this year this can be explained by natural disasters and poor performances by the Titans.

For all that, it’s worth noting that NRL attendances are still 58 percent higher than the AFL in Queensland. NRL is vastly more popular on TV, and although the AFL made some small gains on pay TV in metro areas, it is still heavily dominated in rural viewing.

Queensland remains firmly in the grip of the NRL at this time, and for some time to come.