How to solve the AFL’s tanking problem 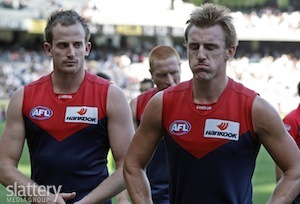 Melbourne's Michael Newton and Lynden Dunn look dejected at the finish of the AFL Round 02 match between the Collingwood Magpies and the Melbourne Demons at the MCG, Melbourne.

The AFL seem intent on removing priority picks as a way to end tanking, or the perception of tanking, as they put it. Many in the media are supportive of this approach, too. There’s just one problem – it’s not that simple.

Firstly, because the priority pick system still has a place in the game.

Just look at Port Adelaide. In a season with no incentive to tank due to the compromised draft ahead, they are on track to win two games. The outlook for next year isn’t much better.

If ever a club was in need of a priority pick, Port would be it – but the scrapping of priority picks would deny them that.

Secondly, it isn’t the right approach because the basic premise behind it – that removing priority picks would end tanking talk – is flawed.

Even without the priority pick on offer, there is still incentive for clubs to finish lower on the ladder and improve their draft position. Recent history even provides an example of a club that did exactly that.

Two years ago former Richmond coach Terry Wallace admitted his effort levels during the Round 22, 2007 game against St Kilda were minimal. “We decided the best way to operate was just to let the players go out,” Wallace said. “I didn’t do anything. I just let the boys play. There weren’t any miracle moves in the last couple of minutes.”

And why did the Tigers adopt this plan? A loss in that game would have ensured the team would finish last and thus be able to draft a player they’d had their eyes on for a while, Trent Cotchin.

Now, in the interests of full disclosure, the Tigers were also in line for an end-of-first-round priority pick by not winning. However, Wallace made it clear that Cotchin was the reason for backing off in that game against St Kilda.

So even if the priority pick was taken away, the notion that any and all tanking talk would suddenly disappear is ridiculous. A different solution is needed.

Stevo had a fantastic suggestion yesterday, which would go tackle the issue at its heart by ensuring less weight is given to “junk matches” late in the season, such as the mentioned Richmond game in 2007, Melbourne’s two bizarre late 2009 games and of course the infamous ‘Kreuzer Cup’.

Now, using this system, Gold Coast’s average ladder position would be 16.15, meaning they would be in line for the first pick. So it’s bound to have its critics.

However, if the aim is to kill off any tanking talk forever, a different solution is needed. Up until now, an NBA-style draft lottery has been the best alternative anyone can come up with – a system which could potentially see a side finish as high as ninth end up with the first overall pick (depending on how you structure it).

As Stevens says, “the mooted lottery system has the potential to throw up far greater injustices”.

The final upside here is that the priority pick may be able to live on after all, just by applying the same system.

“In an 18-team competition next season, if your ladder position average is more than 17, you get a priority pick at the end of the first round,” Stevens writes.

“Average a ladder position of 17 or more two years running and that team would then receive a pick at the start of the draft. A team would have to be insanely poor to execute that dirty double. It might be a once in a 20 years event and if it happened, there would be no accusations of tanking.”

Sounds like Stevo is on to a winner. Let’s hope the AFL is taking notes.

The Gold Coast Suns received a club-saving raft of concessions at the end of the 2019 wooden spoon season. Heading into year two of the three-year assistance package, where do the Suns stand now and how will the AFL’s Covid-19 enforced list changes affect the franchise’s recovery? Headlining the AFL Commission’s response to the Suns’ […]