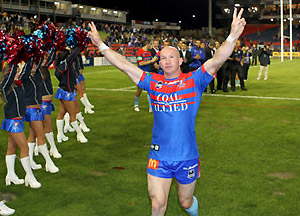 Adam MacDougall gestures during the round 26 NRL match between the Newcastle Knights and the South Sydney Rabbitohs. AAP Image/Action Photographics, Colin Whelan

When the Mad Dog finally says farewell to the NRL, the colour of the game will fade a little. In this world of professional sport, where 14-year-olds are media trained, and everyone knows a clichéd response (even if they don’t understand it), Adam MacDougall is one of the last true eccentrics.

From Dennis Rodman to Greg Matthews, the eccentrics live on fondly in our memory long after we fail to recall the names of performers of comparable ability. Feel free to add your favourite.

Players are, almost universally, entirely predictable. Forced to be nothing and say nothing by clubs that want to avoid controversy and a media that at first lauds and then destroys the colourful.

You can play “Finals Interview Cliché Bingo” over the next few weeks.

“Yeah, we expected that to be tough and it was.”

“We’re really pleased with our effort but there’s no celebration, we still have a job to do.”

“I mean, they are good side and they showed that today and we had to be good to beat them.”

If you are really lucky, you may hear: “Stoked”.

Like politician-speak, the words means nothing because they are deliberately saying nothing. It takes a brave man to speak his mind these days.

The bald veteran with the cheeky smile is known outside rugby league circles as the guy who talks to his thighs.

That story is slightly exaggerated but the last time I spoke to Adam he didn’t deny it.

Essentially, he was sitting in a dressing room looking down at his legs and asking them to perform for him. It’s not really that different to Lleyton Hewitt imploring himself to “C’mon”, but it is the story people seize upon to illustrate that the Mad Dog is different.

He is certainly different – but he is not mad. He is about as far from crazy as any professional athlete I’ve seen up close.

We became quite close about a decade ago and I spent many hours listening to his world view on everything from politics to diet. Everything he has done from his mid-teens has been deliberate.

He has an intimate understanding of anatomy, sports science and nutrition. He knows every single calorie that goes into his body and he knows precisely whether it comes from fat, protein or carbohydrate.

Every minute of training and every body part used was memorised and analysed. He has frustrated teammates and coaches for running his own race, but he is also loved for his warmth and affection and sense of humour.

“Ad” is full of contradictions.

He is fiercely determined but likely to play only once a month.

He is one of the few NRL stars who would always take your phone call but he is impossible to reach because he’s always forget to pay his bill.

Adam MacDougall may have doubted himself sometimes, but he thinks about things. One might suggest that in itself sets him apart. In thinking about things, he forms opinions, and he is prepared to share them honestly with anyone who’ll listen.

He’s not rude or antagonistic or disrespectful, he just says it like he sees it, and he usually sees it differently to everyone else.

He’s copped flak. Heaps of it. And when he was involved in a drug controversy, many thought it was karma.

He has done it all in rugby league, but his eccentricity is what will truly live on and be most missed.

There’ll never be another Adam MacDougall, and that’s the point. He was one of a kind.

But I hope the production line of clones in modern sport and can throw up some mad dogs in the future.

Sport, and the world in general, needs mad dogs.