Crowds are about mob rule, not social commentary

Can everyone stop psychoanalysing a booing crowd? NRL boss David Gallop is the latest to feel the ire of the angry man in the cheap seats.

A crowd of 14,000 Storm fans gave him a right old raspberry, ostensibly for his key role in stripping Melbourne of two NRL premierships for breaching the salary cap.

He has apparently taken it badly, reportedly telling Crocmedia: “I never really go for that whole passion line. I mean, terrorists are passionate about what they do and, you know, that doesn’t make it right.”

Terrorists? It was hardly a jet into a skyscraper, but whatever.

It is the latest in a long line of overreactions to crowd cheers and jeers.

On the same weekend, journalists quizzed Wallaby Quade Cooper and coach Robbie Deans about anti-Australian elements who booed the goalkicker in the match against Italy.

It was in North Harbour, New Zealand. What else could you have imagined?

Sam Stosur was booed and catcalled as the pro-American crowd tried to fire up an uninspired Serena Williams in the US Open final.

I don’t think I have ever been at an NRL game where the referees didn’t cop a bake at halftime, even if the home side is up 10-2 in the penalty count.

On the other hand, crowds cheered when the famous Brookvale brawl broke out. Crowds cheer when a referee falls over.

Ever since we started throwing Christians to the lions, the great appeal of going to a sporting event has been the mindless mob mania.

Who hasn’t cheered away with the rest of the crowd before asking: “What happened?”

John Howard used to get booed every single time he went to a sports event (and he went to plenty) and yet the same larrikin giving it to him on Sunday voted him back in the next Saturday.

Sometime recently, though, a cheer or a boo stopped being just that.

Now, it is interpreted as insightful social commentary. It is psychoanalysed and reflected through the prism of popular opinion.

Now, the entirely predictable act of booing an administrator who made a hard decision is enough to have you labelled a terrorist.

Would any right-minded Storm fan, alone and under oath, seriously endorse salary cap rorting? Of course not.

Was everyone who cheered when the Brookvale brawl broke out voicing a deep-seated enthusiasm for violence? Ridiculous.

Once Serena Williams was beaten, the US crowd showed appreciation and respect for Sam Stosur. It was a big event, their girl was in trouble, they got a bit revved up.

This was not an some anti-etiquette, anti-Australian social statement anymore than those who booed Quade Cooper wish ill upon their neighbours across the ditch.

Cheering and booing is just a bit of fun, it’s not social commentary.

And as Quade Cooper says: ”You can’t tell if they are cheering or booing. The roar from the crowd just spurs you on.”

So how are we all coping during this unfortunate but necessary time of complete sporting shutdown?

A new path for Australian rugby

By 2018, the new Super Rugby format still stumbled along, but the real tragedy was becoming apparent. 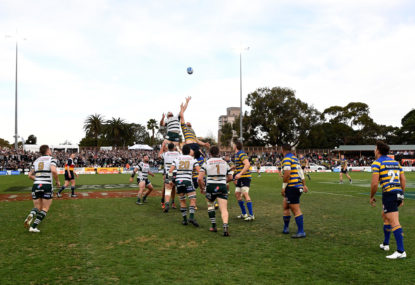 A new path for Australian rugby

Rugby in Australia is struggling. I think of rugby union as a family home.

Back in 2009, the great French thinker and anthropologist Claude Levi-Strauss died at the ripe old age of 100. One of his most influential works was a book about mythology entitled The Raw and the Cooked.

It was June 2017 that I wrote my first article for this site, a piece comparing the back three defensive systems of the All Blacks and the Wallabies and why one system encouraged counterattack and the other made it almost impossible.