The worst team of Rugby World Cup week one

It’s not too early to start thinking about candidates for the worst team award. I’ll start by nominating referee Romain Poite (FRA), and his assistants Jérôme Garces (FRA) and Wayne Barnes (ENG) – sorry Wayne, it’s a team award – for the worst team in the tournament in week one.

Until last night’s Samoa versus Namibia match the quality of the officiating at the World Cup was at least good enough to keep it from distracting me from the play. That changed – Poite and his team [except TMO Graham Hughes] were woeful.

By the second half Samoa was pretty much in complete charge of everything. Poite appeared to be following a Pavlovian script that required a whistle in response to something, but only coincidentally with the match. The assistants seem to have lost interest entirely. None of this indifference benefitted either side.

Two examples from the second half should suffice to illustrate. In Samoa’s last goal-line attacking sequence Census Johnston the totally dominant Samoan tight head did enough to his opposite du Toit to get Namibia a ticket (or three) out of jail.

In the first scrum of the sequence at min 67 – no bind/arm up around du Toit’s throat; second scrum at min 68 – no bind/hand on ground; third scrum at min 69 min – hand straight to ground followed by knee. In the third case Johnston was aided by flanker Ofisa Treviranus boring in and lifting du Toit’s leg.

Poite awarded a penalty try on the third scrum. For what? The Namibian scrumhalf was not offside. When the ball came out the Namibian’s defended from onside positions in-goal. So what was the penalty try for? Samoan dominance?

It seems more likely that Poite had decided to award the try before the scrum was set. Garces, the assistant on the near touchline, was simply missing in action.

As if that penalty try was not enough Poite had one more shot. In min 77 Poite issued flanker Rohan Kittshoff a gratuitous warning when he returned from the bin. That was just sad. Poite then managed a complete howler when Namibia’s flyhalf Theuns Kotze scored a try right at his feet less than a minute later.

Apparently he could not believe his eyes. Even the TMO sounded bemused when he responded to the request for confirmation.

Poite and Garces should not be involved here. They are simply not up to the required standard. There is no basis to conclude that the outcome of this match would have changed with a different officiating team. There is basis to say that neither team benefited from the experience.

Samoa is a very talented group of players. A team? Not so much. In the lead up to playing the big fish in their pool they needed a match that required some them to add modicum of discipline and attention to detail to their flair and spontaneity.

They did not get it. Poite did them no favours. The things not called will be repeated. Those things, not their flair and risk taking, will be their likely downfall against both Wales and SA.

Namibia deserved better. They stood up and played themselves proud for 80 minutes. They, like Samoa, would have benefited from a little more structure. They would not have won, but that penalty try should not have been on their ledger, soiling the record of an otherwise worthy effort.

Wallabie coach Dave Rennie believes two new laws set to be introduced to International matches from August 1 is a great idea but he’d like to see a trial of the 20-minute red card that we saw in the Super Rugby competitions. 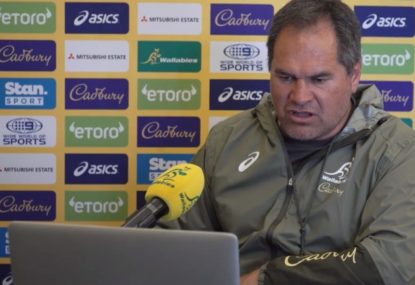 Coach’s Corner Issue 18: Come back number 7, your time is not yet up!

Thanks to all who asked a question at the last call-out, or helped stretch and test it during the forum. As I’ve already looked at the number 6 and 8 positions in the Australian back-row extensively, in this column we’ll tiptoe through the thorny issue of number 7! 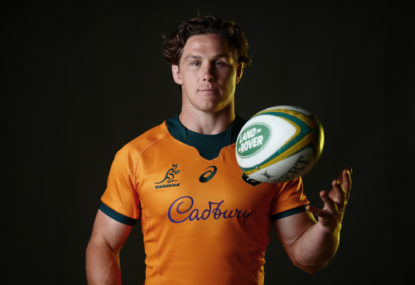 Coach’s Corner Issue 18: Come back number 7, your time is not yet up! 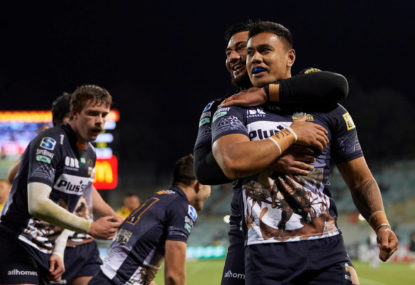 White to miss France series after injuring knee at training

Wallabies halfback Nic White is out of next month’s Test series against France, while fellow veterans Matt Toomua and James O’Connor are also battling injuries, potentially robbing the side of almost 150 Test caps.

White to miss France series after injuring knee at training