North vs South America: A Cup to rival the Euros

﻿In the world of football, FIFA’s 208 member nations are split into six different confederations, roughly based on continental boundaries.

Each of these confederations have there own continental championships for their member nations.

The most prominent examples are the European Championships (affectionately known as the ‘Euros’) and the Asian Cup.

Despite South America’s undisputed footballing prowess, its continental championship, the Copa America, is not a very ‘big’ competition.

Unlike the Euros, it attracts very little global attention, despite a similar standard of football. Why? Because CONMEBOL is simply too small.

The South American confederation has just 10 members, and while they are all good at football, 10 team tournaments just don’t work.

The Copa America doesn’t even involve qualifying matches. In its current form, the Copa constitutes twelve teams, involving the 10 member nations plus two ‘invitees’ from other confederations.

This year, these guest nations are Japan and Mexico. How can a competition be credible if it has just twelve teams, and two of these are from completely different continents?

In a further knock to the Copa’s credibility, many of these invitees don’t even field their first choice teams. In 2007, the USA sent its C-Squad, who consequently lost all their matches.

This year, Mexico is sending its under-23 team. This shows just how little respect other nations have for the Copa.

Quite clearly, the world’s oldest continental championship needs to reinvent itself.

The other American championship is the Gold Cup, for Northern America.

It, like the Copa, also has a low profile, but to make matters worse the quality of football from most of the competing nations is poor.

CONCACAF has 40 members (only 35 are members of FIFA) and most of these nations are tiny Caribbean islands.

To be frank, the only teams of real quality in North America are Mexico and the United States, who have won eight out of the nine tournaments (the other winners were Canada in 2000).

Another issue is the lack of nations able to host the event itself. Since its inauguration, the Gold Cup has been hosted in the US eight times and been a joint US-Mexico hosting twice. It has never been hosted anywhere else.

The Gold Cup probably only surpasses Oceania’s Nations Cup in stature in terms of confederate cups – which is not a good sign.

Clearly, both the North and South American continental championships need a rebirth. So what is the solution?

Something that has been talked about before, and I think is a great idea, is the idea of combining the Copa and the Gold Cup, and creating a tournament for all national teams from the Americas; North, South and Central.

This proposal wouldn’t require the two confederations to merge; they would still be separate in all aspects- rankings, World Cup qualifiers, Exco memberships – except they would share a continental cup.

Many have dubbed this all-American competition the Copa Americas, and the idea has clear benefits for both CONCACAF and CONMEBOL.

Firstly, this Copa Americas would provide teams from both confederations with meaningful qualifying matches- in CONCACAF, the regions strongest teams played pointless matches against footballing minnows, and in CONMEBOL, there were no qualifiers at all.

The second major benefit of a tournament like this is that it would provide for a competitive, large-scale tournament- something that can’t be achieved by the Gold Cup or the South American Copa, who both feature 12 teams in their respective finals.

Think of what a brilliant tournament that would be, especially if you throw in a few upsets by smaller nations.

My third and final reason for creating a Cup for all the Americas is the fact that you would get the best of both continents. North America provides a huge sports market, and as all the tournaments over the years would be played in roughly the same time zone, the USA would be in prime viewing area to watch this competition.

South America provides a very high standard of football – ready to be consumed by the American market. Lots of Americans would tune it to watch their team play the likes of Brazil, Argentina, and Uruguay as opposed to teams like Costa Rica, Honduras, and Jamaica.

Having a major football tournament with this level of quality every four years in North America’s own backyard would provide a huge boost to football in the region.

One of FIFA’s (and the footballing world’s) top priorities is to win over the USA, and a Copa Americas would be a huge step towards this goal.

A tournament featuring teams from both North and South America would give teams from both regions regular matches against each other in the qualifying stages and the finals tournament; it would mean a larger, more credible, more competitive and more entertaining tournament with a higher standard of football; and it would also provide a huge boost to one of football’s biggest potential markets, the US. A Copa Americas really would be a tournament to rival the Euros. 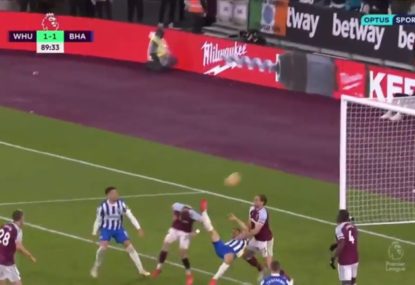