Lawrence blunders his way out of a RWC semi-final 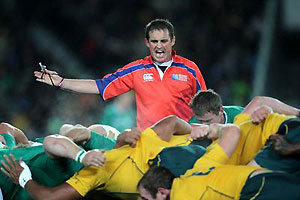 Controversial Kiwi referee Bryce Lawrence has run his Rugby World Cup race – and the relief is palpable. The IRB has appointed Irishman Alain Rolland to control the Wales-France semi on Saturday, and South African Craig Joubert the All Blacks-Wallabies clash on Sunday.

And before the bleeding hearts tear hamstrings racing to his side, Lawrence wasn’t only a bad referee for winning and losing teams. He was bad for rugby.

That was his greatest crime.

Rugby has only one chance every four years to showcase itself, the time to swing fringe dwellers and disbelievers into full time supporters.

Lawrence not only killed off any remote interest from the fringe and beyond, but many long-term supporters as well. It’s not all Lawrence’s doing – it’s been a refereeing disaster throughout the tournament.

But Lawrence has attracted the most attention, because he’s an attention seeker.

To his credit, Lawrence has admitted to making multiple mistakes against the Wallabies in the shock 15-6 loss to Ireland, especially scrummaging, which accounted for six penalties at critical stages.

“And there were other mistakes as well,” Lawrence admitted to publicly, without being specific.

Retiring Springbok captain John Smit swooped on those admissions by giving Lawrence a gobfull after the 11-9 quarter final loss to the Wallabies.

“His refereeing of the breakdown was disgraceful. He let David Pocock get away with murder. Little wonder he won the man-of-the-match award,” beefed Smit.

Even Wallaby coach Robbie Deans chimed in with a rare chip: “Both sides were hard done by.

“It was a hotly-contested area, and maybe it evened out. Maybe it was fair”.

But there are no maybes where Lawrence has been criticised most – in New Zealand. The media and fans are embarrassed one of their own has generated so much adverse publicity.

The well-read internet publication, Trueblue NZ, sums up the reaction in general to the refereeing standard at the seventh Rugby World Cup:

“One of the worst outcomes of the IRB’s management is that games are now won and lost based on the capricious judgment of referees, and their wildly changing approach to the rules.

“Very few referees do a good job. But too many are hopeless, and the most hopeless of them all is Bryce Lawrence”.

Bleeding hearts, have a Bex and a good lie down.